A Window of Opportunity for Education in Mexico

On Monday February 25, having achieved the needed support in Congress, President Enrique Peña Nieto put into effect an education reform that will transform the public education system at its core. If enacted correctly, the reform will allow the country to take important steps forward and proactively tackle one of its most relevant social issues. … Read more A Window of Opportunity for Education in Mexico

Mexican entrepreneur Patricio Villareal has discovered something most of those opposing health care reform in the United States could never imagine: making basic health care accessible and affordable can be a profitable business. In 1994, Patricio and his brother Ricardo co-founded Imagen Dental, a company that provides world-class dental, optical and hearing services to middle … Read more Profile: Patricio Villareal

Mexican President Enrique Peña Nieto signed major education reforms into law on Monday, limiting the power of the teachers’ union. By modifying two articles of the constitution, the overhaul allows the government to hire and fire teachers, and aims to gather reliable data on schools, teachers and students in Mexico’s education system, which serves an … Read more Peña Nieto’s Reforms Take on Teachers’ Union

For generations, world leaders looked to the United States for consent before approaching Latin American leaders.  U.S. presidents James Monroe and Teddy Roosevelt threatened to make war if external powers sought to interfere in Latin America—and European powers, for the most part, followed the script.  The tradition continued after World War II and throughout the … Read more Tequila Sunrise for Mexico’s International Affairs

Mexican President Enrique Peña Nieto, inaugurated to a new sexenio last month, is doing everything in his administration’s power to abate a problem that affects close to 52 million poverty-stricken Mexicans: hunger.  Well before becoming president, Peña Nieto promised mothers, children and the poorest of communities that he would work to end poverty, inequality and … Read more Mexico’s Crusade against Hunger

Airplanes have many parts, from seatbelt buckles and massive brake pads to thousands of precision-shaped screws. In fact, Boeing, the U.S. aerospace behemoth, brags that its 747s are composed of 6 million individual pieces. Multiply that by 35,000—the number of new airplanes needed to meet world demand over the next 15 years—and the opportunities for … Read more Aerospace: An Emerging Mexican Industry 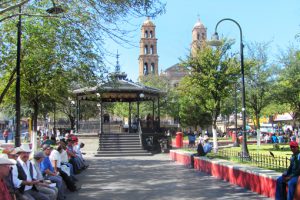 Civic and economic life is coming back to a city once synonymous with gangland murders and violence against women. The lunch shift is in full swing at Viva Juárez restaurant. After a morning of shopping, pedestrians trickle into the popular eatery on Avenida Benito Juárez, where cooks chop onions and peppers at a formica counter … Read more Dispatches: Ciudad Juárez

There is a rising star in Latin America. And it is not the a member of the BRICs, but Mexico. Mexico has received consisten attention regarding its security challenges, but things have started to change over the past few months. In August, Nomura published a report that forecast Mexico would become Latin America’s number-one economy … Read more Mexico: Latin America’s rising star

Monterrey, Mexico: Living amid the Rule of Fear

For the past couple of years, people from all over the world have been asking me the same question: how bad are things in Monterrey, really? Obviously, they are referring to the drug-related violence and overall instability that have recently given the city unwanted international attention. There’s a saying in Mexico: “cada quién cuenta como … Read more Monterrey, Mexico: Living amid the Rule of Fear