March 26 marked the sixth straight month that Mexicans around the world have mobilized to express their dissatisfaction and frustration with the wave of violence, impunity and corruption that has swept the country in the past decade.

According to the UN Committee on Enforced Disappearances, more than 23,000 Mexicans are currently registered as missing, journalists and scholars are threatened and silenced, and everyday spaces are invaded by the various manifestations of this violence. The disappearance of 43 students from the teachers’ college of Ayotzinapa—with the clear involvement of local authorities, police and members of drug cartels in Guerrero—and the deaths of six others in the same protest last September, has stoked the fire of an already actively engaged civil society.

From the Movimiento por la Paz con Justicia y Dignidad (Movement for Peace with Justice and Dignity), which marks its fourth anniversary this month, to the #YoSoy132 movement that began in 2012, the clamor for peace, justice, truth, and accountability has only grown stronger.

The Mexican government has attempted to put an end to the protests and criticism by bringing the Ayotzinapa case to a quick conclusion and by recently replacing Attorney General Jesús Murillo Karam, infamous for muttering “ya me cansé” (“I’m tired”) at a press conference after the students’ disappearance—a phrase that was quickly repurposed as the slogan of a massive protest movement on social media under the hashtag #YaMeCansé.

President Peña Nieto promised to combat corruption, but millions of Mexicans distrust the government and its institutions, which seem more and more distant from the population they are meant to serve, both due to the lack of accountability, and the lavish excesses of the political class, at odds with a country struggling with extreme poverty and inequality.

With midterm elections to be held in June, many Mexicans are calling for voters to annul their ballots in an expression of discontent with the current political parties. The parents of the 43 disappeared students go even further, vowing that they will not even allow the government to set up voting booths in Guerrero. They propose local assemblies as an alternative form of government and refuse to recognize a system that has failed to deliver politically, economically and socially.

Many civil society groups, scholars and experts, equally critical of the current system, propose other channels—such as working through existing institutions to reclaim or expand democratic spaces within them.

Mexicans continue to protest in the streets to demand justice for the Ayotzinapa students and their families, to oppose the Supreme Court appointment of Eduardo Medina Mora—associated with a brutal crackdown on social protests during his tenure as attorney general—and to call for the reinstatement of journalist Carmen Aristegui, whose contract with Noticias MVS was recently terminated after she decried the firing of two employees who had exposed a corruption scandal involving the presidential family. Millions speak up, millions march, and yet it seems that the changes people have demanded for years are out of reach.

#YaMeCansé, Por Eso Propongo (I’ve Had Enough, Therefore I Propose), is an initiative that emerged in the wake of the Ayotzinapa students’ disappearance as a space to express discontent with Mexican politics and to make proposals for change. To join the mobilizations on the streets and in social media and provide a new way to express peoples’ voices, #YaMeCansé, Por Eso Propongo invited Mexicans to write a postcard with their own image and proposal for change. The postcards were printed and have been exhibited in public plazas and museums to foster dialogue and new forms of civic participation. They have also been delivered to government offices—including Congress, the Supreme Court, the Office of the President, and the Ministry of the Interior, as well as the National Commission of Human Rights, the National Electoral Institute and to political parties, to demand a response to the very concrete messages from Mexican citizens. 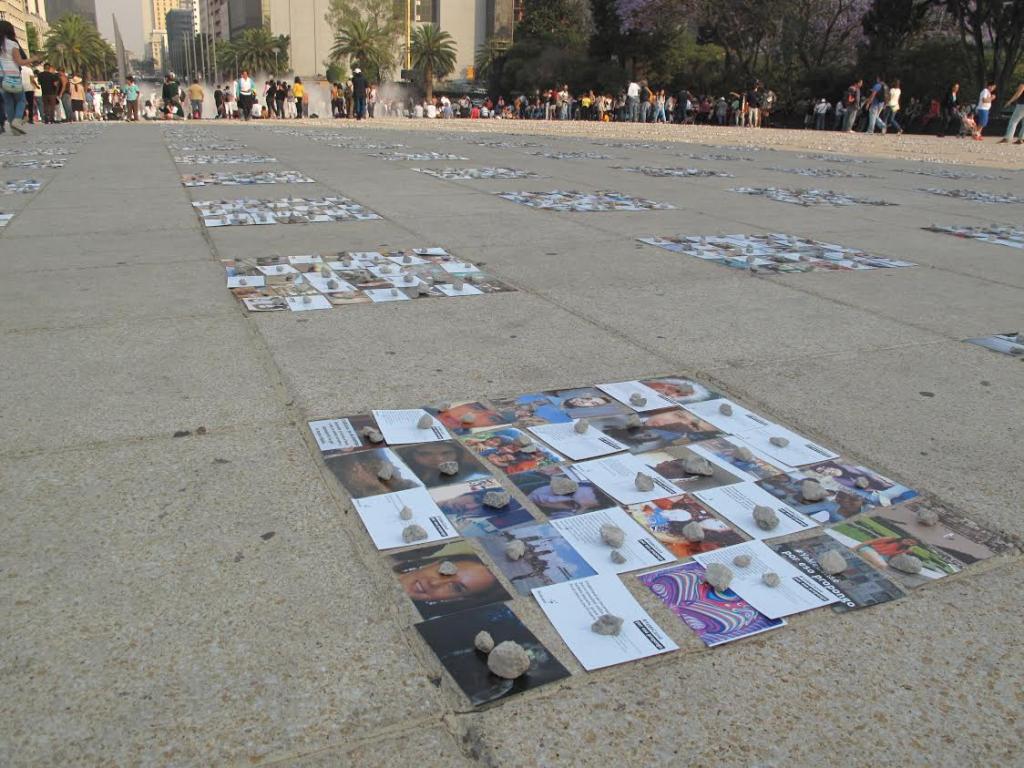 8000 postcards displayed at the Monumento a la Revolución in Mexico City, March 3, 2015. Image courtesy of author.

The hundreds of postcards turned into thousands only a few weeks after the campaign was launched, and we realized that there were many areas of citizen consensus on certain topics. One of the main goals of this initiative was to provide a platform for diverse voices, but we also saw an opportunity to build a common agenda that came directly from participants. Through data analysis, we identified the most frequent proposals and summarized them in a document called “10 citizen battles.”

The 10 topics included here are not comprehensive or representative of all the people that participated in #YaMeCansé, Por Eso Propongo, but they are a starting point to present a concrete agenda, both to Mexican citizens and to government representatives about the changes that most agree are necessary.

Those topics include: increasing the minimum wage to reduce inequality; eliminating government officials’ guaranteed immunity; reducing public financing for political parties; improving health and education services; supporting culture and the arts; promoting a civic culture with an emphasis on human rights; reforming the police and building a relationship of trust with society; and reducing salaries and benefits for public officials. These, and many other proposals, show that Mexicans have a clear sense that solutions will only come when the structural causes of violence, corruption and inequality in the country are addressed. 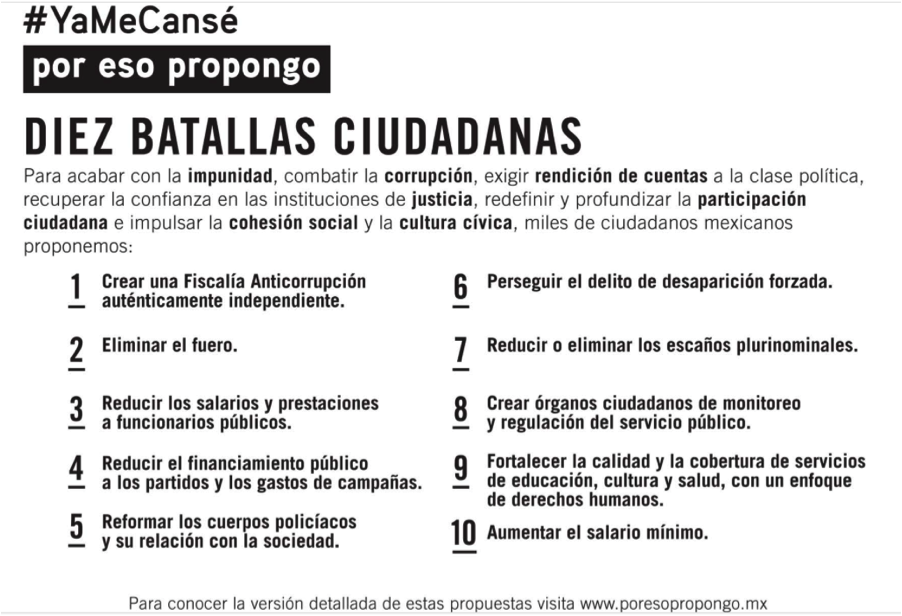 Postcard that summarizes the 10 most frequent proposals that came up in submissions to #YaMeCansé, Por Eso Propongo. Image courtesy of author.

Ayotzinapa marks a before and after in Mexico. It has led more and more Mexicans to openly and publicly express their discontent and to evaluate proposals for change through protests, postcards and other forms of expression, joining efforts with others who also want the same things. This is a fundamental part of the continuing process of building truly democratic spaces in Mexico—a process that is alive and shows no sign of fatigue.