A joint report by ProPublica and NPR released Wednesday alleges that the Red Cross “repeatedly failed” in its efforts to provide adequate support to Haiti after the country’s 2010 earthquake. Among other shortcomings, the report says the aid group only built six houses, despite announcing two high-profile housing projects and raising nearly $500 million in … Read more

On Wednesday, the Dominican Republic government denied a deadline extension request for applications to the Plan Nacional de Regularización (National Regularization Plan) from 18 advocacy organizations dedicated to defending Haitian migrant workers’ rights. The deadline for registration is scheduled for June 17. Roudy Joseph, spokesman for the coalition of organizations, announced that a document would be … Read more 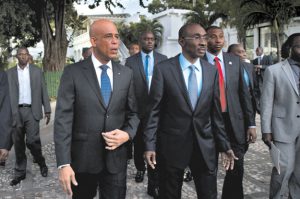 Haiti: Back to the Future?

January 12, 2015, was a grim day in Haiti. Not only was it the fifth anniversary of the devastating earthquake of 2010, it was also the day that President Michel Martelly placed a major question mark over the future of Haiti’s troubled democracy. On that day, Martelly began to rule by decree while a long-simmering … Read more

Only two countries in Latin America—Costa Rica and Uruguay—can be considered “full democracies,” according to an Economist Intelligence Unit (EIU) study commissioned by BBC for Democracy Day on January 20. The report says that a majority of Latin American countries hold “free and fair” elections and are better ranked than their counterparts in the Middle … Read more

When’s that last time you talked about Haitian cuisine? When people talk about Haiti, they often focus on the grim figures.  It is the poorest country in the Western Hemisphere. Three-quarters of Haitians live on less than US$2 per day, and half of the population earns less that US$1 per day.  The country ranks 161st … Read more

Haitian national police confirmed on Monday that nearly three dozen detainees escaped from a prison in the provincial city of Saint-Marc, 100 km (60 miles) north of Port-au-Prince. According to reports, the detainees sawed through a cell window and jumped out. The five guards on duty at the time have been detained on suspicion of … Read more