By now, we are all familiar with the scale and complexity of the Car Wash investigation underway in Brazil. How did it achieve these results? What lessons can we take from it? What are the repercussions for other countries in Latin America? These are questions with only partial answers at this time. But they can be the starting point for study.

In Ibero-American countries, the characteristics of corruption repeat themselves again and again. Corruption in the bloc is in large part rooted in the colonial model employed by Spain and Portugal in the “New World.”

The similarities seen in corruption throughout Latin America suggest that the efforts to combat it should be coordinated, with countries in the region sharing common tools and strategies.

Indeed, that’s how it should be done.

If any country in the bloc moves forward and achieves progress in fighting corruption in isolation, this will generate an imbalance in the region. Corruption will soon migrate to other countries within the bloc, perpetuating the state of paralysis in economic and social development, and impacting the entire geopolitical environment.

How can we avoid this problem?

Let us analyze what is happening in Brazil, and what are the possible lessons we can extract for the regional fight against corruption.

From a still incomplete examination of the Car Wash case, we can delineate two types of corruption.

The first type is endemic. Endemic diseases are infectious maladies that usually have significant incidence in a certain part of the population or region. Endemic corruption lacks organization: It exists because of a series of cultural, moral, and ethical factors.

The second type of corruption is structured and systemic. Structure refers to the organization, sorting and order of the essential elements that make up a body — concrete or abstract. The system is the interrelation of the elements that make an organized structure work.

Structured and systemic corruption presupposes organization with its own defined scope. It is quantitatively more devastating than endemic corruption, and it requires organized and planned actions to combat it. 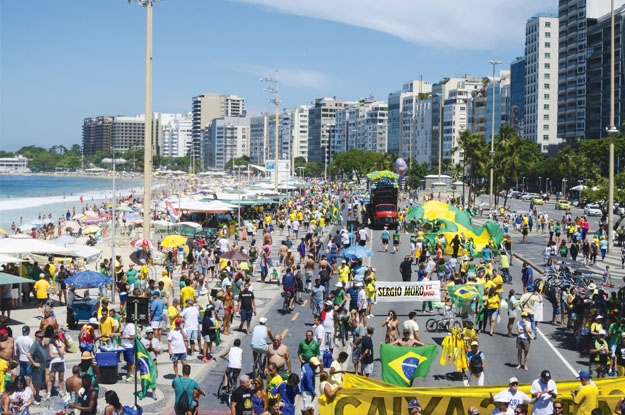 Brazilians march to show their support for anti-corruption effots on March 26, 2017

Organized crime structures capture centers of power in a planned, systematic way. They foster frauds in the bidding process, distort competition, and promote cartelization and oligopolies in important sectors of our economy (infrastructure, construction, energy, etc.).

They establish fixed percentages over contract values for the payment of bribes, including the financing of electoral campaigns, and various crimes, such as money laundering, through increasingly sophisticated methods, active or passive corruption, embezzlement, misfeasance, and fraudulent bidding.

The Car Wash Operation was dedicated to the investigation of structured and systemic corruption, and it has generated incredible results.

Among the combination of factors that allowed this work to be done, some structural aspects stand out. They can and should be studied throughout the region.

I cite initially the independence and autonomy of the attorney general’s office and the magistrate.

Independence takes root through several guarantees. It starts with recruitment of personnel through a transparent public process. After two years in office, members of the attorney general’s office or the magistrate acquire tenure, and can only be dismissed by judicial conviction when a crime is committed; they cannot be removed or dismissed from processes assigned to them. (See articles 93 and 95 of the Brazilian Constitution).

The autonomy of these institutions is revealed by the fact that they are self-managed and control their own budgets.

Without functional independence and autonomy, it is not possible to face the corruption that is part of the modus operandi in the centers of political and economic power in the region.

A second important aspect for the success of the investigations was intense international judicial collaboration.

As of September 15, 2017, there were 303 requests for international cooperation: 176 active requests to 39 countries and 127 passive requests originated in 30 countries.

In truth, this area has had some stumbles. A powerful instrument foreseen in international conventions (UNCAC, UNTOC, VIENA, and in the Mercosur Buenos Aires Agreement of 2010) — the joint investigation teams — has not been used until now, due to the incompetence of the Brazilian federal authorities in these international agreements. No team was ever formed, despite formal requests from Switzerland, Spain and Argentina.

Therefore, transnational criminal cooperation through direct collaboration between attorney general’s offices, without the meddling by the executive branch, is of great value.

Another interesting aspect highlighted by the Car Wash case was just how relevant the use of plea agreements was.

Criminal organizations are hermetically closed structures, inspired by the law of silence, omertà.

Not an easy path, but a necessary one

Investigating these organizations demands knowing their structure, their participants, their hierarchical order, the division of tasks, the types of crimes they practice, their way of operating.

To investigate such organizations is no easy task.

To crack them open and dismantle them requires knowledge of their internal systems. This is only possible when someone who knows the operation reveals the facts to investigators.

The Car Wash investigations only penetrated a broad spectrum of Brazilian society because of such plea agreements, a total of 120 of them as of September 15, 2017. They were able to reveal the entire criminal organization, composed of politicians and businessmen, because of the detailed descriptions made by the various collaborators — information that complemented other testimony.

Thus, this instrument, already tested successfully, must be used by all countries of the bloc in the fight against corruption.

In conclusion: To replicate the success of the Car Wash investigations through the region, the countries of the bloc should ensure that their attorney general’s offices and judiciary are independent and autonomous; they must foster legal cooperation between public prosecutors without the interference of the executive branch; and train joint research teams and use plea agreements as an effective tool for dismantling criminal organizations.

This path is not easy. But it is necessary.