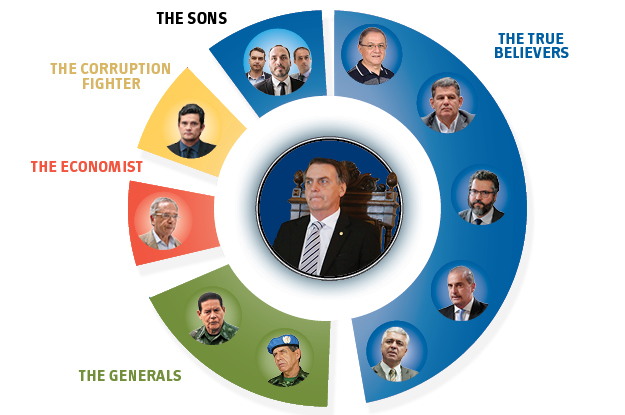 Who they are: Masculine, aggressive and powerful in their own rights, Bolsonaro’s sons epitomize their father’s ideology and have played critical roles bringing forward a Trumpian world view in their father’s administration.

What they’ll do: Their disruptive behavior, like Eduardo suggesting the Supreme Court could be shuttered, will likely continue. It feeds the hard-line factions of their base and provides their father an opportunity to play moderator, reassuring his more reluctant supporters. Eduardo is also becoming an influential voice on foreign policy, having participated in the decision to name the new foreign minister and acting as an envoy to the U.S.

Who he is: Vélez is a Colombian-born philosopher and professor at a military school. Endorsed by Olavo de Carvalho, he is aligned with conservative groups. On his blog, he has criticized “politically correct” globalism and called Brazilians “hostages of an education system that indoctrinates students into scientism and Marxism.”

What he’ll do: Vélez applauded military schools for their model of “disciplinary teaching.” Observers expect his policies to cater to Bolsonaro’s evangelical and conservative bases. He promises, for example, to “clean” the ENEM, Brazil’s SAT-type of test, of “ideological indoctrination.”

Who he is: Bebianno is a lawyer who had no political experience until 2017, when he became a friend of Bolsonaro. For much of 2018, he was president of the PSL. A close confidant of the president, he was one of the few people in the then-candidate’s hospital room after his stabbing.

What he’ll do: Bebianno will head the general secretariat of the president’s office, a role akin to chief of staff to the president. In practice, he will help coordinate the cabinet and shape Bolsonaro’s policy agenda.

Who he is: A police officer, Major Olímpio was Bolsonaro’s campaign manager in São Paulo. He first won a seat in Congress’ lower house in 2014, and surprised pollsters after defeating seasoned politicians in the Senate race for São Paulo in 2018. He’ll likely be the government’s leader in the Senate and a leading voice of the chamber’s evangelical and law-and-order caucuses.

What he’ll do: While he’s outspoken on corruption, Major Olímpio will be a hawkish voice on law and order, pushing for looser gun legislation and lowering the age of criminal responsibility, and probably a dissident voice on social security reform.

Who he is: An early supporter of Bolsonaro’s campaign, the hot-tempered Lorenzoni bonded with Bolsonaro in 2002 when they both opposed gun control legislation as members of the lower house. Starting in 2017, Lorenzoni hosted a weekly gathering in Brasília to bring key power legislators and power brokers closer to Bolsonaro.

What he’ll do: His chief mission will be to build support for the government in Congress. Bolsonaro was elected with the promise of rejecting any tit-for-tat negotiations with Congress. Governability will depend on Lorenzoni’s success.

Who he is: Araújo is a mid-level career diplomat who previously directed the foreign ministry’s U.S. and Canada department. In his personal blog, Araújo praised Trump, described climate change as a Marxist plot and ranted against “anti-human and anti-Christian” efforts to build a world government.

What he’ll do: If Bolsonaro follows through with his more controversial promises, such as moving Brazil’s embassy in Israel to Jerusalem, it will be Araújo that must deal with the fallout. Domestically, he will appeal to Bolsonaro’s ideological base.

Who he is: The “Corruption Buster” who oversaw the Lava Jato investigation, Moro brings prestige to Bolsonaro’s government beyond the president’s core supporters. Yet his decision to become a “super minister” intensified suspicions that he had political motivations as a federal judge.

What he’ll do: Anti-corruption reforms — from lobbying legislation to technical measures for fighting financial crimes — will be at the heart of Moro’s agenda, but he will also oversee the crucial area of security policy. Moro may be at odds with Bolsonaro on topics like reducing the age of criminal responsibility or passing legislation to criminalize certain social movements.

Who he is: Guedes, a University of Chicago PhD. who had a very successful career in finance, is Bolsonaro’s “super minister” for economic policy. Guedes’ appointment during the campaign was key for Bolsonaro to win the support of the market.

What he’ll do: He will be in charge of an expanded ministry with a portfolio that ranges from fiscal and trade policy to privatizations and microeconomic reforms. Critics point to his lack of administrative or political experience and a mercurial personality. Guedes’ first test will be pension reform. If he is unable to quickly present a clear road map, his credibility with the market will erode.

Who he is: A retired four-star army general, Heleno was the force commander of the UN mission in Haiti in 2004 and 2005. Idolized by active duty military, Heleno is key for keeping the armed forces close to the government.

What he’ll do: Officially, Bolsonaro chose Heleno to lead the Institutional Security Cabinet, which oversees intelligence matters and the president’s security. Yet he has been advising the president on a much broader range of issues — and is seen as a moderating element on areas like foreign policy and security.

Who he is: Another four-star army general, Mourão retired in February 2018 not long after he hinted at the idea that Brazil’s political crisis was inviting a military intervention.

What he’ll do: During the campaign, Mourão made several statements contradicting Bolsonaro. Recently, he has been trying to increase his profile and influence in areas such as foreign policy, staking out a more constructive, globalist stance on issues like Brazil’s relationship with China.

Why he’s the opposition: With Luiz Inácio Lula da Silva behind bars, likely for many years, the fight for power within Brazil’s battered opposition is on. Haddad was badly beaten in the electoral run-off, but he will likely remain as the de facto leader of the Workers’ Party (PT), the largest party in Congress following the elections and still the most powerful player within the Brazilian left.

What to expect: Haddad won’t be starting from scratch in his effort to rebuild the PT. Although also facing corruption accusations himself, he does not appear to be in imminent danger and his image among Brazilian progressives is positive. The biggest challenge for Haddad will be friendly fire coming from other PT leaders, such as Senator Gleisi Hoffmann, and figures trying to undermine the PT’s hegemony over the left, such as Ciro Gomes.

Why they’re the opposition: After calling Folha the “biggest fake news in Brazil,” Bolsonaro barred the publication from his first post-victory press conference. The newspaper’s investigations into Bolsonaro’s alleged corruption and campaign fraud have put the president on defense. Among them are revelations that the then-candidate benefited from an illegal scheme to flood WhatsApp with advertising and fake news.

What to expect: Folha is already the loudest voice against the administration in the media and the newspaper appears to be fully embracing this role. Bolsonaro allies are suing the daily and the president has promised to cut all public advertising. Yet Folha has significant financial independence, and the government’s antagonism will likely boost its reputation.

As a candidate, Jair Bolsonaro promised sweeping changes for Brazil. Below, a look at what he wants and why he’ll likely get his way. Note: “Odds of implementation” refers to the chances that a given policy will be implemented, not whether it will achieve its intended outcome.

“Unleashing” Agribusiness
During the campaign, Bolsonaro’s attacks on environmental agencies and NGOs made him a hero for the more radical ruralistas, as the powerful agricultural congressional caucus is known.  He promised to make it easier to farm land in Brazil, even if that meant, for example, stripping indigenous Brazilians of protected territory or drastically reducing controls on deforestation. Bolsonaro’s choice for agriculture minister, Tereza Cristina, was the president of the caucus before his election and is directly associated with the more extreme forces within the group. She has doubled down on her new boss’ promise to end fines on environmental violations.

Odds of implementation: High
Bolsonaro will need the ruralistas’ votes in Congress to advance other elements of his agenda, and the caucus became even more powerful following the 2018 legislative elections.

War on Criminality
Though police kill 5,000 Brazilians a year, Bolsonaro has been clear his approach to Brazil’s record high violence will be an outright siege on criminals with police receiving carte blanche to kill. His allies in Congress will push to reform existing legislation to expand access to guns and to try teens as adults.

Odds of implementation: High
Public exasperation over crime may be Bolsonaro’s biggest well of support, but Congress’ rightward shift in 2018 also creates a favorable environment in Brasília for this agenda. Yet his hardline approach will likely increase violence, with painful human costs.

Pension Reform
Brazil’s pension system is a ticking time bomb and, if not deeply reformed, will blow the country’s budget in a not-so-distant future. Average retirement age is below 60, certain groups enjoy lavish privileges and Brazil’s population is aging. Without a comprehensive reform on the horizon in the first months of the new administration, doubts about Brazilian solvency will increase, with a potential domino effect on other reforms on Finance Minister Paulo Guedes’ agenda.

Odds of implementation: High
Given the strong pressure from markets and the incoming economic team, Congress will likely pass some form of pension reform. Yet the more important question is whether the change will be deep enough. Bolsonaro has spoken about passing several bills, instead of a constitutional amendment (which requires a supermajority in Congress). However, using ordinary laws to address key points, such as establishing a new minimum retirement age and reviewing so-called acquired rights, will likely lead to protracted judicial battles and more uncertainty.

Anti-Corruption Reforms
Bolsonaro has promised Justice Minister Sérgio Moro “total freedom” to design and enact anti-corruption reforms. While traveling to meet with the president-elect for the first time, Moro was photographed holding Transparency International’s recommendations for enforcement and transparency. Yet the nature and extent of his reform agenda was still mostly unknown as this issue went to press.

Odds of implementation: Medium
Given Moro’s reputation, legislators will have a hard time publicly rejecting Moro-sponsored bills on corruption. But some factors may well derail broad anti-corruption reforms in Congress. Moro has no experience as a policymaker or negotiating in Brasília. Also, his proposals will compete with other priorities in Congress for Bolsonaro and his allies — from pension reform and security to “moral” issues.

Overhauling Education
Schools are likely to be ground zero for the crusade of social conservatism expected from Bolsonaro and his allies. A critic of affirmative action, the president has also spoken about combatting “Marxism” in schools. His education minister, Ricardo Vélez Rodríguez, supports the School without Party movement, which seeks to pass legislation “cleansing classrooms from leftist indoctrination,” including conversations about gender and sexuality. Vélez and Bolsonaro have also promised to remove “ideological content” from ENEM, Brazil’s federal scholastic test. How they will translate this ideological cleansing into actual policy is uncertain.

Odds of implementation: High
Bolsonaro’s allies will not have serious problems passing broad legislation in Congress on “moral” and “ideological” issues of education. Yet the government will have limited administrative powers, as Brazil’s public education from daycare to high school is almost entirely under municipal and state authorities.

Brazilians elected a raft of new legislators in October 2018. Below, a breakdown of the support Bolsonaro commands in Congress, with the caveat that allegiances may – and likely will – shift. 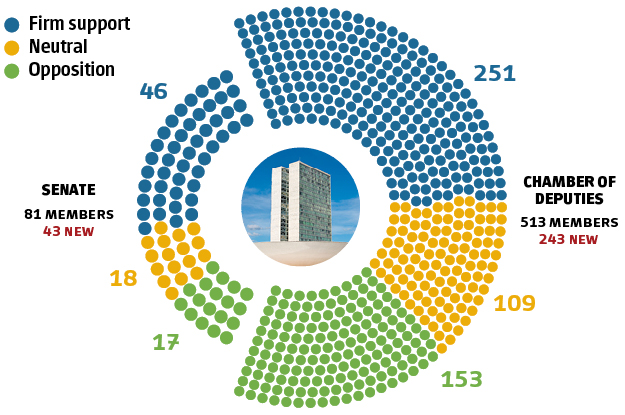 O’Boyle is a senior editor at AQ. Reporting on congress by Ximena Enríquez.

Tags: Brazil, Brazil's New President, Jair Bolsonaro, Who's Who Brazil government
Like what you've read? Subscribe to AQ for more.
Any opinions expressed in this piece do not necessarily reflect those of Americas Quarterly or its publishers.