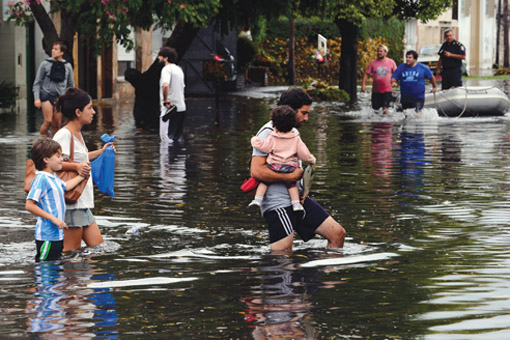 As the most urbanized region in the developing world, Latin America and the Caribbean are seriously threatened by flooding and the resulting devastation. Seventy-three percent of the region’s urban population lives in low-elevation coastal zones, or in areas at risk from sea level rise. Furthermore, 32 percent of the urban population lives in informal settlements, most of them in flood-prone areas.

Climate change is primarily responsible for the recent and dramatic rise in urban flooding. It has triggered heavier rainfalls, stronger storms and rising sea levels. Many coastal and off-river cities in the region lack the infrastructure to manage these unprecedented water flows. As a result, when a period of extremely heavy rainfall occurs—such as in La Plata, Argentina, last April—the city is left underwater.

Recovering from these incidents is costly. The estimated cost of damages to Tabasco, Mexico, after the city was hit by floods between 2007 and 2011 was 57 billion pesos ($4 billion).

The Inter-American Development Bank’s (IDB) Emerging and Sustainable Cities Initiative (ESCI) helps cities not only bounce back after disaster but better adapt to a changing climate. This involves both so-called “gray” investments in upgrading municipal infrastructure—such as sewers, drainage systems and seawalls—and greener approaches.

Gray infrastructure investment can be a mixed blessing, however. For example, in the Netherlands, man-made sea walls have disrupted tide and sediment flows, killing the natural flood protection provided by sandbars, wetlands and oyster beds. Green solutions, on the other hand, mimic natural conditions already present in the ecosystem, protecting land areas from water over the long term.

One place where ESCI is applying gray and green approaches to mitigate flooding is the Pantanoso River floodplain, a valuable environmental resource in metropolitan Montevideo, Uruguay. One of the city’s priorities, as outlined in the action plan developed by ESCI, is to manage or restrict settlements in the flooding area, thereby avoiding high gray infrastructure costs and expensive mitigation efforts.

In cities already established in flood-prone areas—which is most often the case—the challenge is to effectively deal with the water. Frequent flooding in Port of Spain, in Trinidad and Tobago, causes huge disruptions. Through ESCI, the IDB is working with the city to arrange comprehensive financing aimed at improving the drainage infrastructure, along with developing a linear park along the East Dry River to serve as a natural infiltration area during overflows.

Such efforts make clear that strategies for coping with disasters must incorporate green approaches that lead to a longer-lasting, more sustainable flood management system.

Horacio Terraza is the infrastructure coordinator of the IDB’s Emerging and Sustainable Cities Initiative.