Early in The Distinguished Citizen, Daniel Mantovani (Oscar Martínez) says the only thing he’s ever done is escape the town of his youth. The truth is that his past sustains him more than he would like to admit. 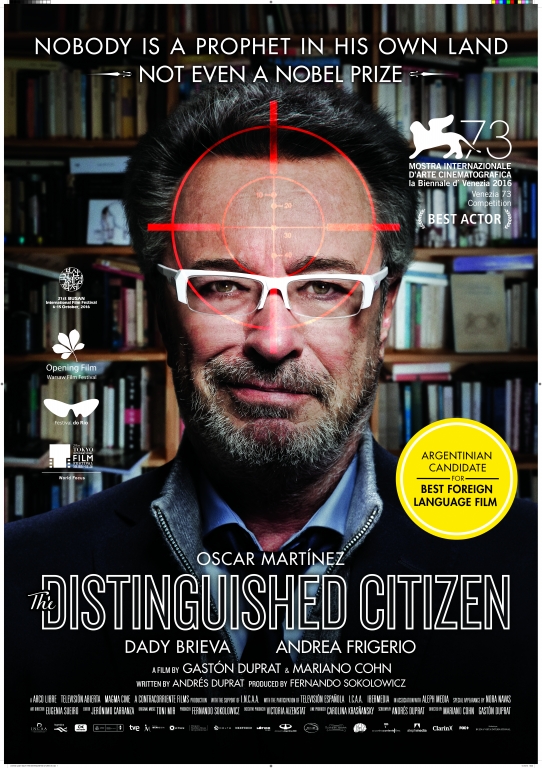 Daniel, the “distinguished citizen” of this dark comedy by Gastón Duprat and Mariano Cohn, is an aging novelist who earned a Nobel Prize by retelling the tales of his native Salas, a rural town in the Argentine pampas. He lives in Europe and hasn’t been back to Salas in nearly 40 years, preferring to revisit the places and characters of his adolescence only by setting versions of them down on the page.

But five years after winning the Nobel, Daniel has run out of ideas, and spends more time turning down interview requests than actually writing. An unexpected invitation from the mayor of Salas — who wants to honor its illustrious native son — lures Daniel back to the source of his creative inspiration.

The saying that you can’t go home again proves true. Over several days of parades, lectures, and an unfortunate turn as judge of a local art competition, Daniel’s intellectual principles come into conflict with the small-town politics and petty temptations of his former home.

At the heart of The Distinguished Citizen are questions about the nature of creativity, ownership of art, and the vagrancy of truth. There is enough virtue in Daniel to keep the film’s title from being entirely ironic, but the wicked fun of this story comes when he gives in to his baser instincts and proves no more or less “distinguished” than his provincial counterparts.

Russell is a senior editor for Americas Quarterly