Over the last few weeks, Venezuela has found itself engulfed in protests against current President Nicolás Maduro’s administration. While the student movement has spearheaded this uprising, many Venezuelans have taken to the streets to voice their grievances against the country’s high levels of violent crime, inflation, and the increasing scarcity of basic goods.

A brief look at what we refer to as Chávez’s “political culture legacy” suggests that, in the absence of Chávez-like charismatic leadership in Venezuela, and under the weight of the social and economic problems noted above, political instability was a likely outcome.

Both indices are converted to a 0 to 100 scale and respondents are then divided by whether they score “high” (50 or above) on levels of system support or political tolerance, or “low” (below 50) on each index. We then look at the combination of these two attitudinal dimensions to calculate the percentage of Venezuelan respondents with attitudes conducive to stable democracy, authoritarian stability, unstable democracy, and democracy at great risk. 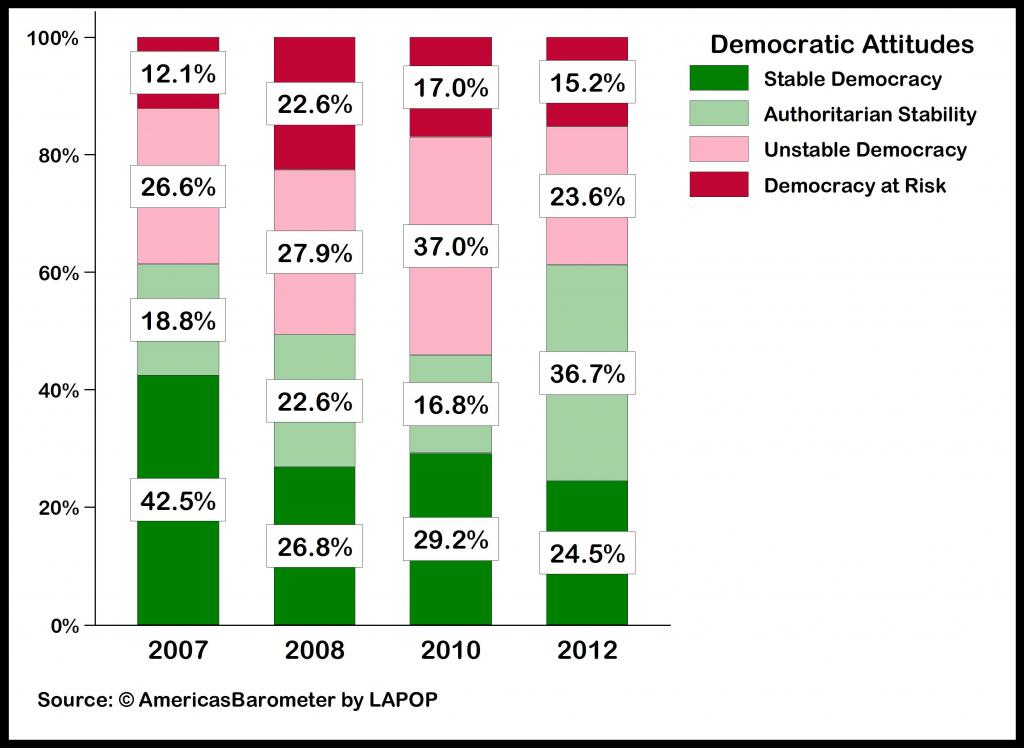 As seen in Figure 1, a fundamental shift in Venezuela’s political culture had occurred by 2012. Whereas in 2007, over 40 percent of Venezuelans expressed attitudes conducive to democratic stability, in 2012, high levels of system support and low levels of political tolerance created an attitudinal environment strongly associated with authoritarian stability. With his death in 2013, then, Chávez left behind a political climate in which the regime was stable but democratic rule was threatened by a tendency to reject the political rights of system dissidents. These changes in political culture during the second half of Chávez’s 14-year rule parallel the regime’s heightened authoritarian tendencies during this same time period. Regime measurement efforts such as Polity IV, the World Bank Governance Indicators, and Freedom House democracy scores typically point to the December 2005 National Assembly elections, in which Chávez supporters won all 167 seats, and the 2006 re-election of Chávez as decisive steps away from democracy for the regime.[3]

Further, these characteristics of Venezuela’s political culture are not all that surprising when we examine the political context surrounding the presidential elections of 2012. Not only did Chávez face his most competitive opponent to date in Henrique Capriles, but a widely publicized battle with cancer also gave the president a sympathy element that further allowed him to use his powerful personality and charisma as a means to link himself with the larger political system.

This powerful connection between support for Chávez and support for the system now stands as a core feature of the “Chávez political culture legacy” in Venezuela. According to the 2012 AmericasBarometer survey, Venezuelans that intended to vote for Chávez expressed an average system support score of 72 on a 0 to 100 scale (100 signifying the strongest support), while those that intended to vote for another candidate or submit an empty ballot recorded an average system support score of 38. Thus while Chávez opponents already expressed low levels of system support in 2012, the overall political culture of Venezuela while Chávez was still in power was most conducive to “authoritarian stability”, as is evident in Figure 2.  However, what may have changed since the death of Chávez is a decline in system support among those who linked their support of the system to their support of Chávez. Though we must await data from the AmericasBarometer 2014 Venezuelan survey to evaluate this proposition, we have good reason to believe that the dominant political culture now in place in Venezuela is one of low political tolerance and system support, creating the conditions for a democracy at risk. 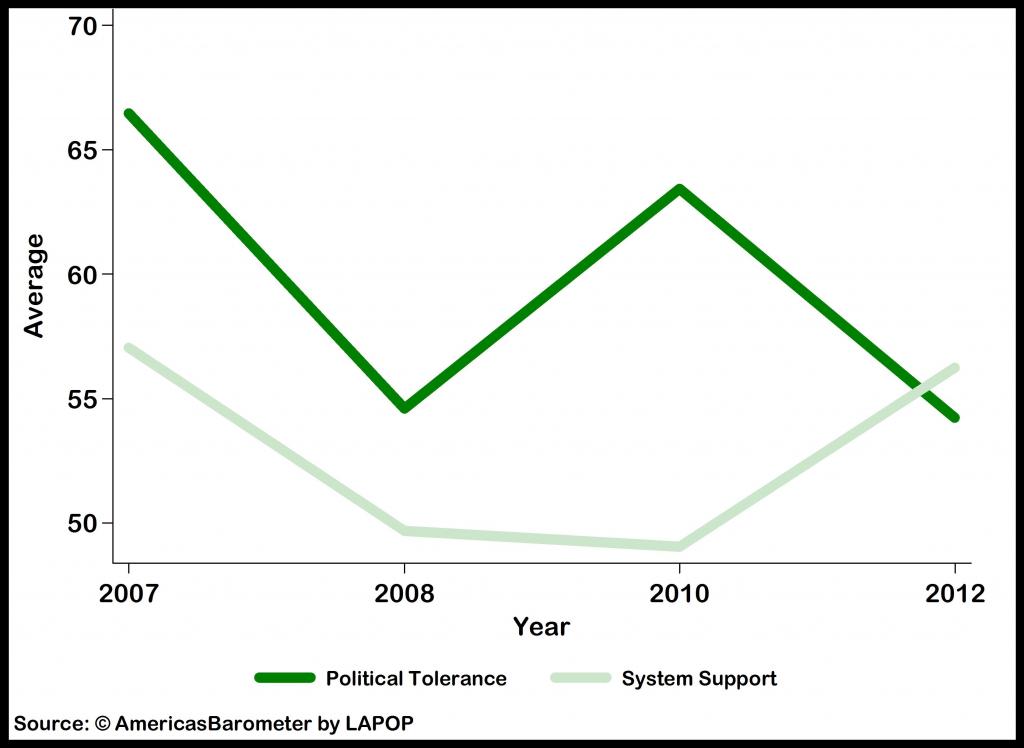 After Chávez’s death, this legacy of authoritarian stability, intimately tied to the Chávez “cult of personality” he created, likely unraveled for several reasons. First, the poor performance of the Maduro administration is likely to have diminished the high levels of system support achieved by Chávez. In terms of leadership ability, Maduro is clearly not Chávez—he lacks Chávez’s charisma, and, arguably, Chávez’s political savvy. Additionally, under Maduro, Venezuela has confronted one of its worst social and economic crises in years, with inflation rates at over 55 percent, a widespread scarcity of goods and unprecedented levels of crime and violence (AP 2013; Caselli 2014). Supporting this intuition are data from Gallup’s September 2013 survey of Venezuelans that found 52 percent of respondents disapproving of “the way Nicolas Maduro is handling his job as president.” In contrast, when asked this same question in 2012, 58 percent of respondents approved of Chávez’s performance in office. In the same September 2013 survey, 56 percent expressed little confidence in the national government (Gallup 2014).[4]

Second, the lid on overt hostility between chavistas and opposition supporters that Chávez left behind now seems to have cracked. Levels of political tolerance also have likely declined under Maduro as many chavistas have assumed more defensive attitudes in the face of the diminished status of the Bolivarian Revolution in the hands of Maduro. Opposition leaders, in turn, have become even more strident in their desires to regain some measure of influence in the Venezuelan political system.

Third, Chávez’s institutional legacy of limiting the political rights of the opposition appears to have been continued by Maduro in an effort to maintain stability but, as is often the case, has only served to fan the flames of protest. Clashes between protesters and government security forces continue to garner international attention as widespread media censorship and government repression against protesters have increased. Violent confrontations with the police and the Bolivarian National Guard have left more than a dozen dead, 150 injured, and even more detained (Ellsworth and Cawthorne 2014).

All of these factors suggest a shift in Venezuelan political culture from the “authoritarian stability” that Chávez left as his legacy in 2012 to one of “democracy at risk.” That is, since the death of Chávez, it appears that political tolerance has continued to decline, while the high system support that was so strongly linked to Chávez the individual seems to have greatly diminished under Maduro. Of course, we will need to examine planned 2014 AmericasBarometer survey data to determine if indeed this is the case.

Democratic stability will reemerge in Venezuela only when all citizens and public officials, including chavista and opposition supporters alike, agree that political institutions are legitimate, while also expressing tolerance of the rights of those who may not share their political views. Considering Chávez’s political culture legacy and the hostile climate between hardline chavistas and angry opposition protesters that currently saturates political life in Venezuela, it seems that a long and difficult road toward social reconciliation and democratic institutional legitimacy lies ahead for Venezuela.


Tags: Hugo Chavez, Nicolás Maduro, Venezuela
Like what you've read? Subscribe to AQ for more.
Any opinions expressed in this piece do not necessarily reflect those of Americas Quarterly or its publishers.