The image on our cover, a photoshopped image depicting Pope Francis smoking marijuana with former Bolivian President Evo Morales, thus “proving” the Argentine pontiff is a decadent socialist at heart, was the most ridiculous recent example of fake news we could find. But it was hardly the most damaging.

This special report of AQ focuses on the profound, and possibly terminal, threat that fake news and misinformation pose to the democracies of the Americas. Whether it’s memes falsely alleging election fraud in Brazil, or touting bananas as a miracle COVID-19 cure in Mexico, the onslaught has accelerated a decade-long trend of declining confidence in democratic institutions, while costing countless lives during the pandemic. Disillusioned, many are putting their faith instead in authoritarian leaders, who are delighted by (and in some cases directly feeding) the confusion.

Upcoming elections over the next year in Chile, Colombia and, especially, Brazil will be a major test. Governments, social media companies and traditional media are brandishing an array of tools—some new, some old—in the hope of halting the decay. But there is no silver bullet, and some of the proposed cures, such as government-run fact-checking agencies or jail time for those who propagate fake news, may be worse than the disease itself. President Jair Bolsonaro and other leaders seem determined to protect their “freedom of speech” online, setting up a showdown with courts and tech companies—and possibly a constitutional crisis in Brazil.

The only surefire solution is education: media literacy and other programs to teach citizens to be more discerning about what they consume. Big tech companies could also increase funding for serious newsgathering outlets (whose business model they helped destroy). But these are long-term solutions, and they require public buy-in. So far, the 21st century has only seen people withdraw deeper inside bubbles of their own design. It’s unsettlingly unclear what, if anything, could change that. 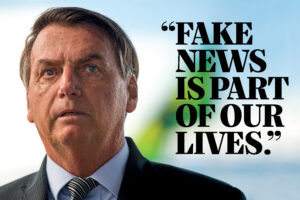 In the 2022 election campaign, Jair Bolsonaro and his followers may test the limits of democracy to protect their “right” to post. 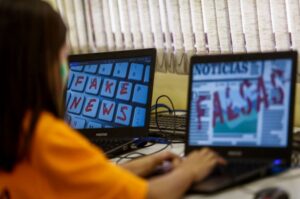 A close look at how governments are trying to curb the scourge of misinformation – to varying effects.

Tags: Democracy in Latin America, misinformation, Social Media, The Battle Over Fake News
Like what you've read? Subscribe to AQ for more.
Any opinions expressed in this piece do not necessarily reflect those of Americas Quarterly or its publishers.