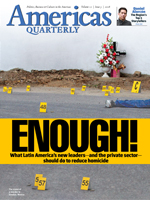 Latin America’s murder epidemic has no easy fix. But there is reason for hope in the innovative – and in some cases, inspiring – work underway by researchers, activists, politicians and law enforcement officials.

By BRENDAN O'BOYLE
Which policies have been effective in reducing homicides? A study guide for Latin America's newly elected leaders.

Call Now to Save Your Life: A Colombian Experiment in Homicide Prevention

By JOHN OTIS
Murder-victims-to-be often know they are in mortal danger. Medellín created a hotline to save them.

What Latin America's Presidents Are Doing to Cut Murder Rates

By EMILIE SWEIGART
How the leaders (or leaders-to-be) of 18 countries are facing down their countries' unique challenges and what critics say they're doing wrong.

How the Business World Can Help Stop Latin America's Violence

By BENJAMIN RUSSELL
Business leaders in Mexico's deadly Chihuahua state found an unusual way to fund anti-violence programs: They asked the government to tax them.

By SABRINA MARTINA
Verse from a 20-year-old rapper and poet about the violence that overshadows daily life in her Rio de Janeiro favela.

Against the Tide: Why It's So Hard to Stop the Violence in Brazil

By RICHARD LAPPER
In a murder-plagued Brazilian city, leftist legislator Renato Roseno evangelizes for preventive and social solutions amid a clamor for hardline enforcement.

By JUAN MANUEL SANTOS
The outgoing president of Colombia takes a frank look at the failed "War on Drugs" and maps a way forward.

By LIDIA HERNÁNDEZ-TAPIA
Countries have been experimenting with drug policy. A look at the results.

Why Trade in Latin America Is Easier Than You Think

AQ profiles five women and men who use their voice (or their pen or their camera) to tell stories we might not otherwise hear.

By XIMENA ENRÍQUEZ
An Argentine photographer and chronicler of history.

By BRENDAN O'BOYLE
A Chilean rapper and activist.

By BENJAMIN RUSSELL
A drama about the "mafia of power" in Mexico.

By SEBASTIÁN ZUBIETA
What to listen to this (northern) summer.

Books: Cross-Border Unity in the Age of Trump

By EMILIE SWEIGART
Erika Guevara-Rosas, the Americas director for Amnesty International, spoke to AQ about the dire state of human rights in Nicaragua.