Venezuelan President Hugo Chávez has defied and frustrated opponents and observers for 13 years. Will the October 2012 presidential elections be any different? Many believe a worsening economy, electricity and water shortages, and rising crime and lawlessness weakened El Comandante Chávez politically even before his cancer diagnosis. Polls conducted by Greenberg Quinlan Rosner before news of the president’s ill health (June 18 to June 30) showed that 53 percent of Venezuelans felt the country was headed in the wrong direction. Many identified concrete concerns linked to the president’s government. Most surprising, though, is that Chávez retained a 51 percent approval rating among the general population and recent polls have shown that number to be climbing again. Will an uptick in public support stymie next year’s opposition contenders? 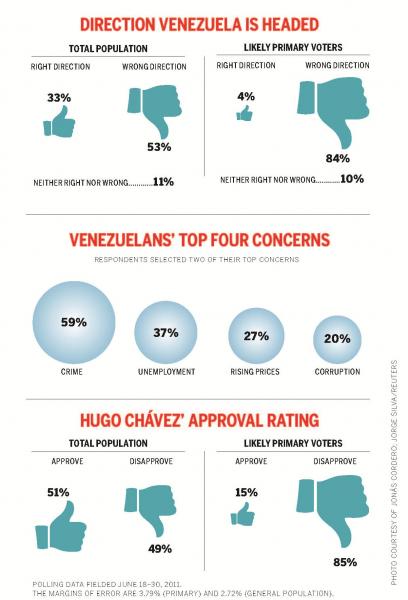