On a smoggy Thursday afternoon in late January, Mark Camp, director for U.S.-based Cultural Survival Project, drives a big red truck with plates through traffic toward Congress. Camp—who looks more like an insurance salesman with a ponytail of gray hair, suit and polka dot red tie—has organized volunteers from community radio stations to flood the legislature’s halls on this big day for Guatemala’s community radio movement. Some have traveled almost two days by bus to make it in time.

“This is a historic occasion—years of trying and frustration have never brought us this far before,” said Camp nervously waiting outside the steps of Congress. “We think we have a real opportunity this year to get a law passed that will recognize the right of communities to have their own radio station.”

For the first time in 12 years of attempts to pass a law to legalize and to grant frequencies to community radio stations, the National Movement of Radio Stations—represented by these cell phone-wielding radio volunteers ready to broadcast live in a Mayan language—have scored a win. The bill, called “The Law of the Community Radio Number 4087,” has received support from the President of Congress’ Pueblas Indigenas Committee and is now being sent back to the General Assembly. If passed, the bill would guarantee the use of at least one FM frequency for community radio in each of ’s 333 municipalities. Multiple towns could use the same frequency because of their limited broadcast range and one-third of all FM frequencies would be added to a new reserve as they become available.

For almost 60 years, community radio in has existed without legal backing; close to 2,000 radio stations now exist without a license. Many are religious and about 10 percent are community-backed stations run by volunteers. The radio towers, such as the one on air since 2003 in Sumpango, Sacatepéquez, often sprout out of people’s homes to transmit to a mostly indigenous population with a strong oral tradition. 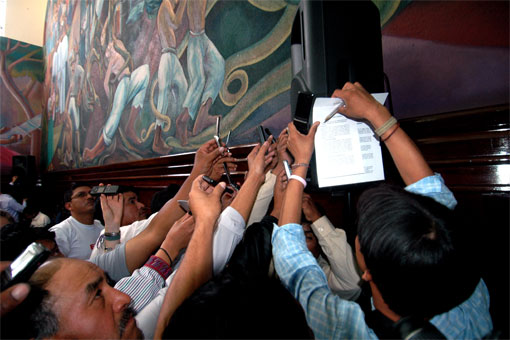 Volunteers of the National Movement of Radio Stations gathered to demonstrate in January 2010.
Photo courtesy of Kara Andrade.

“Community radio is a development tool for our people,” said Anselmo Xunic of Radio Ixchel of Sumpango. “Our experience with radio means we spread our culture, traditions and use that space to keep ourselves informed of what happens locally, nationally and internationally.”

The role of community radio for development in rural countries like Guatemala with high illiteracy rates is multifold, writes Bruce Girard in The One to Watch – Radio, New ICTs and Interactivity because it involves communities and individuals in an interactive social communication process. One of the reasons there are so many community radio stations in can be explained in part by the fact that most television programming in is produced locally or nationally. With only 30 percent of television programming coming from the region, indigenous languages are generally absent from the region’s television screens. But in the majority of community radio stations regularly offer programs in a local language.

For the National Movement of Radio Stations—representing 20 of the 22 departments and 168 radio stations—a precedent is being set in the way that people are lobbying members of Congress as one unit.

But Federico Balderramos Vallerades, Secretary of the Guatemala Chamber of Broadcasting, says the stations are doing this behind his organization’s back. “The problem isn’t the existence of these stations, it’s the illegal use of the space. They are creating competition, but they are also blocking legal stations’ frequencies, it’s a finite space and not everyone can have their own station because they want one.” He agrees with the general sentiment that these spaces should be opened up and frequencies set out for the use of community projects for temporary periods of time. But who’s going to guarantee that these spaces won’t be used for inciting political action against the leaders of a community or for making a profit?

Prospects may look better than ever for legal recognition of community radio stations, but Camp doesn’t kid himself about the road ahead. “If our journey started from , maybe we’re in western .”

Kara Andrade is a contributing blogger to AmericasQuarterly.org. She is a Central American-based freelance journalist who has worked as a multimedia producer and photojournalist for Agence France-Presse, Associated Press, San Jose Mercury News, and Oakland Tribune, among other publications.

Kara Andrade is an Ashoka fellow working in Central America. She is co-founder of HablaCentro LLC and NFP which develops curriculum to help people in Latin America become more digitally literate and civically engaged; conducts trainings in the use of digital tools to create more informed citizens; and connects collaborators to opportunities for economic sustainability. She has worked as a multimedia producer and photojournalist for various publications, including The New York Times and Christian Science Monitor.