Last week Guatemalan President Otto Pérez Molina lifted the state of siege on Santa Cruz Barillas in which 17 residents were arrested for public disturbances. But tensions still remain high weeks after community members first demonstrated their opposition to the building of the new Hidralia Energia dam in this primarily Indigenous town close to the border with Mexico.

Pérez Molina declared the state of siege on May 3 and sent in an initial force of 260 troops and national police to Santa Cruz Barillas to “restore order” after a group of 200 men armed with machetes and guns took over a military base in the area. He justified martial law on the grounds that rioters’ ties to the Zetas drug trafficking cartel contributed to the disturbances. 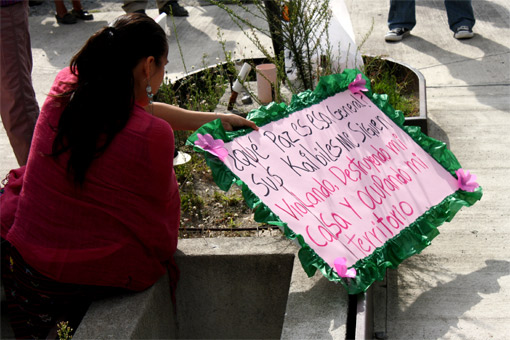 At the height of martial law, an estimated 850-army and national police officers were deployed in Santa Cruz Barillas.  Thousands marched in Huehuetenango, the regional capital on May 15 to denounce governmental action.  Protester Juan Juarez, a 70-year-old resident of Ixcán Playa Grande, Quiché said to citizen journalist website HablaGuate, “Santa Cruz Barillas is suffering repression by the government of Pérez Molina. We worry because the government of Guatemala is defending the interests of the hydroelectric company more than Santa Cruz (Barillas).”

Clashes first arose after the death of community leader Andrés Francisco Miguel who had opposed the hydroelectric dam. Subsequent attacks on other community leaders left two seriously injured. It was the culmination of years of protests over the building of the dam, which protesters said they were not consulted about; they called for a suspension of the company’s license.

According to the Guatemala Human Rights Commission, UDEFEGUA (the Guatemalan Human Rights Defenders Protection Unit), the Dioceses of Huehuetenango and the Renovated Democratic Freedom Party had denounced the state of siege in Barillas and demanded it be lifted. There have been numerous reports of violations of community members’ rights such as the illegal entry into homes and the destruction of private property in the search for weapons.

But the Spanish company Hidralia Energia wouldn’t budge and stated that the project met all environmental and legal requirements.

Local residents have historically been opposed to the dam. In 2007, 46,000 residents voted against allowing mining or hydroelectric companies to operate in the area. Hidralia Energia, whose local company is Hidro Santa Cruz, did not enter into negotiations with the locals who believe construction would harm the Cambalan river ecosystem. Tensions between the locals and the company increased with allegations that Hidralia Energia was using landmines and Claymore-type bombs to protect their equipment.

This latest incident is unfortunately part of Central America’s long history of conflict between hydroelectric companies and Indigenous groups that are often forcibly removed to make way for the dams.

In 1976, the Guatemalan government announced plans to move Achi Indians (who were living along the Chixoy River) in order to build a hydroelectric dam. The village of Rio Negro, the only one that had refused to relocate without adequate compensation, was attacked by soldiers in 1979. Three years later, in February 1982, 73 villagers were ordered to report to Xococ by the local military commander. Only one woman returned; the rest were raped, tortured and murdered by the local Civil Defense Patrol (PAC) in Xococ.

A month later, 177 Achi women and children were killed at the massacre of Rio Negro by Xococ patrolmen. Three members of the PAC were sentenced to death in 1998 for war crimes; in 2008 five more former paramilitaries were sentenced to 780 years in jail each for their role in events in Xococ.

In Honduras, the El Cajón dam has been an environmental and financial disaster.  Finished in 1985, the resulting soil erosion has led to lower water quality, negatively affecting the surrounding flora and animal population.   Resistance against the project was so fierce that an army base was constructed at its entrance to ensure its safety.

At the crux of the problem is Central America’s energy crisis—a result of ageing infrastructure and demand that is increasing by an average of 5-6 percent per year. Guatemalan government reports from 2011 warn that the country could reach full capacity by 2015. That is part of the government’s urgency in building the plant in Santa Cruz Barillas, which is estimated to provide 10 percent of Guatemala’s electricity demand once operational.

Still, actions such as the recent governmental siege are not a long-term solution for balancing local needs with development priorities. A new approach is needed to meet the country’s competing interests and demands. 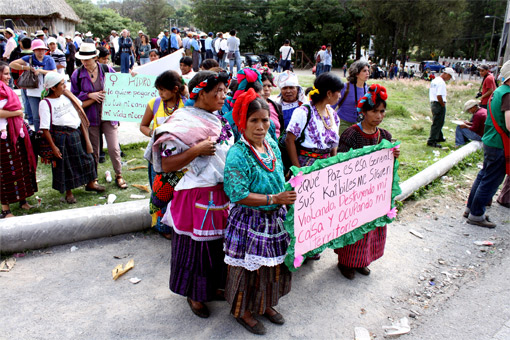 *Nic Wirtz is a contributing blogger to AQ Online. A freelance journalist who has lived in Guatemala for the last six years, his work has been featured on the Christian Science Monitor and GlobalPost and he edits the website Vozz.

Nic Wirtz is a freelance journalist who has lived in Guatemala for the last six years. His work has been featured on the Christian Science Monitor and GlobalPost, and he is editor for the website Vozz.