Over the course of my week in Cartagena, I have become more steeped in the language, culture and attitudes of Colombians. It seems fitting, then, that the last music concerts I attended at the Festival Internacional de Música were distinctly rooted in Colombian traditions and modern identities, rather than the classical music of Europe. As much as the festival may cater to an international audience, on Thursday and Friday the spotlight was on Colombia and its next generation of musicians.

At the beginning of Thursday evening’s concert, which took place in the by-now-familiar Plaza San Pedro Claver, the festival’s artistic director Stephen Prutsman appeared on stage. “Tonight you can show your emotion for the music,” he told the audience. “This is no ordinary classical music concert.” To make sure they understood his meaning, he then led them in a practice round of applause.

They did. Thursday evening’s concert, entitled Colombia Mágica (Magical Colombia), drew standing ovations and pleas for encore performances. One group it featured was the Guafa Trio, which—founded in 1998—was one of the first groups to combine classical music’s technical rigor with instruments and traditions native to Colombia. With the high, airy notes of the flute and earthy, sensual beats of the base (contrabajo), Guafa Trio’s music immediately called to mind folkloric tunes of the Andes.

The concert also featured Marta Gómez, a singer/songwriter who is originally from Cali. Wearing a long black dress under a bright yellow shawl, her black hair neatly parted and slicked back in a tight bun, Gómez made for a striking presence on stage even before she began singing. Accompanied by musicians from across South America and even Russia, her voice strong and charged with emotion (reminding me alternately of Mercedes Sosa, Enya and Alanis Morissette), and her hips swaying naturally to the music, Marta Gómez hypnotized the audience. They held their breaths during her melancholy solos, clapped enthusiastically to the beat of her cumbia, and cried for more when it was all over. 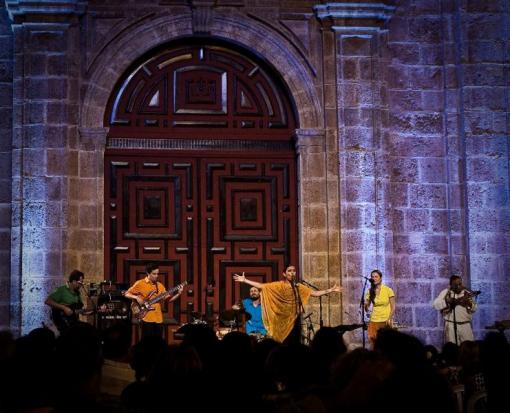 Friday’s concert was also emotional, but for a different reason. A youth talent concert, it showcased four of Colombia’s brightest and most promising classical musicians—reminding audiences why an international classical music festival does indeed have a place in Colombia. The performance consisted of piano, oboe, harp, and violin solos by young musicians (16 to 23 years old) from the Colombian cities of Medellín, Bogotá and Pereira.

Sitting in an auditorium at the Institución Universitaria de Bellas Artes y Ciencias de Bolívar (UNIBAC) among an audience of no more than 250 people, I felt more like I was at a school recital than a professional classical music concert—and I mean that in a good way. All week long, I have been searching for signs of resonance between this elite, outward-looking festival and local Colombians. I have found them in a few places, including the open-air, public concerts and the Fundación Salvi’s social programs, and I was heartened to see one here.

Family members, music students, professors, and regular ticket holders converged in one place to witness with pride the next generation of Colombian musicians. Sixteen-year-old Elvis Alejandro Díaz played the harp with a boldness beyond his years, while pianist Manuela Osorno presented diverse and lengthy pieces by Bach, Colombian composer Emilio Murillo and Cuban composer Ernesto Lecuono with stamina and poise.

After the concert, as the audience milled about in the courtyard, family and friends greeted the performers with hugs and kisses, while strangers introduced themselves to say how proud they were. Speaking with Manuela Osorno, the pianist, I asked her what role she thought music should play in the development of her country’s youth. “To transform them” was her unhesitating response.

She—and the three other performers at the youth talent concert—are leading by example.

*Nina Agrawal is an associate editor for Americas Quarterly. She is blogging this week from the 2011 Cartagena International Music Festival.

January 13, 2011: “From Cartagena, An Interview with the Music Festival’s Founder”

Nina Agrawal is Policy & Communications Coordinator for the Collaborative for Building After-School Systems at The After-School Corporation. She previously served as Departments Editor of Americas Quarterly and as a Policy Associate at Americas Society/Council of the Americas.