Almost a century after its beginnings in a Havana prison, the Cuban puppet opera Manita en el suelo was performed for just the second time, this July in Brooklyn.

A chamber orchestra, a chorus and an elaborate yet rustic set of puppets bring to life this subversive opera buffa conceived by a pair of modernist Cubans, with a score reconstructed by Americas Society music director Sebastián Zubieta.

The opera stars the “Three Juanes”—Juan Esclavo, Juan Indio and Juan Odio—who represent Cuba’s African, Indigenous and Spanish roots. They fish from their canoe but catch only starfish, reflecting the hunger afflicting Cuba in the waning years of the Gerardo Machado dictatorship, when the opera was written. So they resort to eating Motoriongo, a sacred black rooster that, in this production, boasts a fearsome 12-foot wingspan—a transgression that brings a curse down on their heads.

A version of the opera was performed in Cuba in 1985 but used dancers instead of the puppets envisioned by its creators: Alejo Carpentier (1904–1980), one of the greatest Latin American novelists of the 20th century, and composer Alejandro Caturla (1906-1940), sometimes called the “Cuban Stravinsky.” Both were modernists immersed in the ferment of the European interwar avant-garde.

This staging hews more closely to Carpentier’s and Caturla’s vision. In the preface of their 1934 libretto, they write that the opera aims “to bring together on a single stage for the first time in Cuba all the characters from popular mythology.” They imagined an intimate staging in a modest theater where “everything that happens on the small stage is enveloped in an atmosphere of prayers, tobacco box lithographs, Santería images and witchcraft altars.”

Carpentier and Caturla were both white, and their work—defined by a vision of a nation that respects the contributions of its marginalized communities—was a radical departure from the prevailing elite opinion of the time. Carpentier brought deep knowledge to the effort: He wrote the first comprehensive history of Cuban music, still regarded as one of the best. Throughout the 1920s, he had worked to bring Afro-Cuban art and artists into the avant-garde, and in 1927, he wrote the novel Ecué Yamba O (“God Be Praised,” in an Afro-Cuban language) from a jail cell after he was imprisoned by the Machado dictatorship. That novel formed the basis for the Manita libretto.

For his part, Caturla dedicated himself to studying the complexities of polyrhythmic Afro-Cuban percussion and learning from the practitioners, or ñáñigos, of Cuba’s abakuá (secret societies that practice spiritual traditions with origins in West Africa). Caturla’s life was brief—also a judge, he was killed at 34 by a criminal he was about to sentence.

Carpentier and Caturla named their opera after a real-life ñáñigo named Manuel Cañamazo, whose long arms earned him the eponymous nickname that translates as “hand on the ground.” In 1871, Cañamazo and other abakuá led an assault on Havana’s jail—the same jail where Carpentier would later write Ecué Yamba O—hoping to free white medical students whose families they had served as domestic laborers. Cañamazo was killed along with at least four others, and eight of the students were ultimately executed.

After they eat the sacred rooster, the opera’s protagonists, the Three Juanes, are trapped in rough seas in their canoe—which represents the island of Cuba. They are saved by Cuba’s patron saint, the Virgen de la Caridad del Cobre, thought also to represent syncretic versions of African and Amerindian water and fertility deities. Her story dates to the early 1600s, when three fishermen are said to have found an image of her that calmed a storm.

Here, the Virgin appears in puppet form, rough yet majestic—like the production itself. After decades of obscurity, this one-night-only performance of Manita en el suelo opens the door to future stagings, and the wider audience that the opera deserves.

Rich Brown is an editor and production manager at AQ. 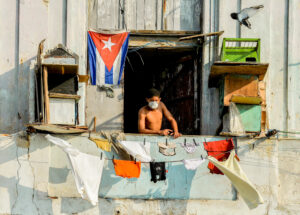 Cutting through cliché and dogmatism, the Cuban writer’s new collection delivers a “masterclass in creative reportage.” 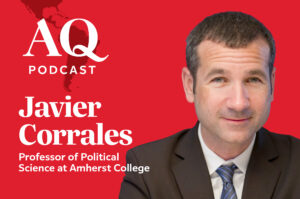 AQ Podcast | New Unrest in Cuba: What It Means

Tags: Cuba, Cultura, Millennials in Politics, Opera
Like what you've read? Subscribe to AQ for more.
Any opinions expressed in this piece do not necessarily reflect those of Americas Quarterly or its publishers.