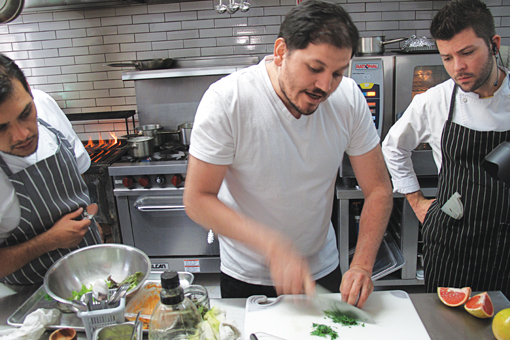 Besides the tens of thousands of deported immigrants that stream into Guatemala every year, many come back of their own free will, citing reasons that range from warmer weather to lower costs of living and a more relaxed pace of life.

The Guatemalan government does not keep data on migrants who return voluntarily, so precise figures on how many come home each year are unavailable. Although defining a general profile of voluntary returnees is difficult, many have high levels of English proficiency and are better off economically than their compatriots who have been deported. They may own businesses in Guatemala or work at jobs that pay above the minimum wage as call center employees or university professors.

In Quetzaltenango, roughly 125 miles (201 km) northwest of Guatemala City, Willy Barreno fires up the stove at his restaurant, Café R.E.D. He opened it with help from local investors to cook for a group of visiting Guatemalan college students, tapping into a passion for cooking that he discovered in the United States.

Barreno, who studied social work at a Guatemalan university, left his home town of Quetzaltenango, also known as Xela, for the U.S. with a visa in October 1996, the year the Guatemalan government signed a peace deal with rebel fighters to end its civil war.

While in the U.S., he worked as a chef in restaurants across the country, cooking in and managing kitchens in New Mexico, Wisconsin and Illinois, sending money to his parents in Guatemala, which they used to buy their first home.

Looking to reconnect with his Guatemalan roots, Barreno, 41, took a bus back to Guatemala in 2010. He founded a nonprofit group called Desarrollo Sostenible para Guatemala (Sustainable Development for Guatemala—DESGUA) seeking to support return migrants by helping them find places to live and work and connecting them with other returnees.

Barreno is not alone. Others have returned and started families in Guatemala, even at the cost of leaving behind loved ones in the United States. Víctor Guzmán went to the U.S. at age seven as a “mojado” in 1987 with his aunt and uncle, sneaking into California, where he met up with his mom.

After attending U.S. schools, he chose to return to Guatemala in 2007. He found a job at a call center called Transactel, where his English fluency and work ethic helped him ascend the ranks to senior supervisor.

Guzmán’s mother, now a legal U.S. citizen, still lives and works in Santa Barbara, California, where she heads up a team of janitors. Guzmán, married with two young daughters, has no plans to return. He is saving money to buy a home in Guatemala for his family.

Soon the entire family may be reunited once again in their homeland. Guzmán’s mom is considering retirement in Guatemala.