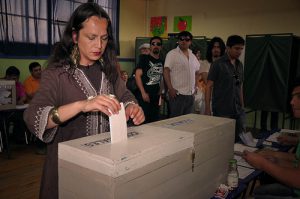 The center-right ruling Alianza coalition led by President Sebastián Piñera suffered a setback in the municipal elections held on October 28. A year before the presidential election, prospects for the Alianza look grimmer. The Piñera administration—inaugurated two weeks after the devastating February 2010 earthquake—is now confronting the political aftershocks of his coalition’s losses and hoping … Read more