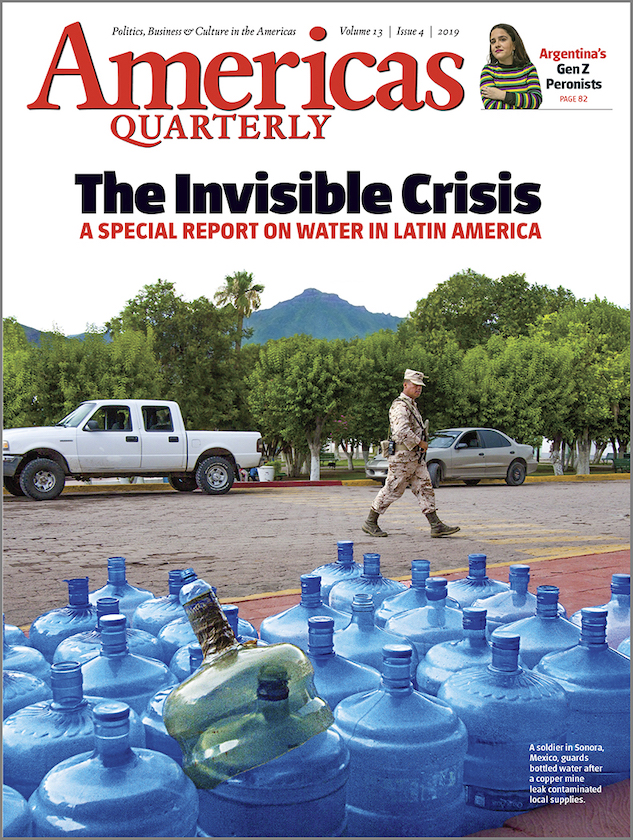 Droughts and other water-related challenges pose a rising threat to millions of Latin Americans. But some governments and companies are pointing the way forward.

Medellín's Other Success Story: How the City Cleaned Up Its Water

By SETH KUGEL Inside the dramatic turnaround that made Colombia's second city a model for water management.

By SIMEON TEGEL To prevent a crisis in the future, Latin America's largest desert city is looking to the past.

Latin America's Water Is at Risk. Here's How Governments Are Responding.

By EMILIE SWEIGART and BEN MILLER A close look at where Latin America's water crisis is playing out, and how governments are responding.

In Brazil, Two Corporate Giants, a Drought and an Unexpected Partnership

The Rush to Save Argentine Malbec

By LUCIA HE Climate change is making water scarce in wine country – putting an Argentine staple at risk.

In Mexico City, a Black Market for Life's Most Basic Commodity

By BENJAMIN RUSSELL What happens when water just doesn't get there? A tale of illegal taps and pipe-truck kidnappings.

How to Stop Drought from Becoming Famine

By JOSÉ GRAZIANO DA SILVA The former chief of the UN Food and Agriculture Organization on how agribusiness can preserve vital resources.

How Chile's Environment Policy Is Good for Fish, and for Business

By EMILY PETSKO The country's science-based approach shows fishing can be environmentally sustainable.

By DAVID ROCKEFELLER JR. It's not too late for the region to take action on climate change and its toll on water.

By CECILIA TORNAGHI A new film goes behind the scenes of Brazil's politically charged youth movement.

Books: The Other Side

By BENJAMIN RUSSELL A work for young adults by Juan Pablo Villalobos on the triumphs and trials of Central American migration to the U.S.

By ROBERTO SIMON and EMILIE SWEIGART How Latin America can punish corruption without killing companies.