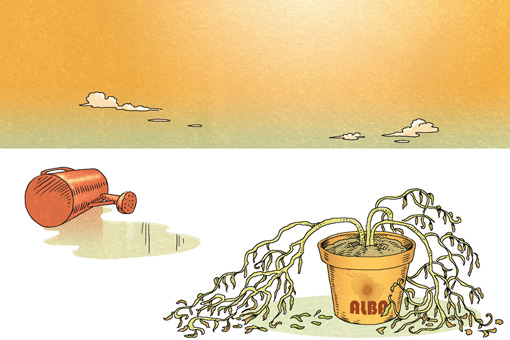 Despite its pretensions, the alliance was held together primarily by oil largess that can’t last.

This is a preview article from the Spring 2013 issue of Americas Quarterly, “Latin America Goes Global,”  which will be released on May 2, 2013. Check back later this month for more information about the new issue.

The death of President Hugo Chávez is a great loss for the Alianza Bolivariana para los Pueblos de Nuestra América (Bolivarian Alliance for the Peoples of Our America—ALBA). But it is unwise to conclude from this that ALBA will disappear altogether. Chávez achieved influence for his presidency and for ALBA by expressing and representing new power relations within the hemisphere. These dynamics have not changed with his death.

Leftist governments are on the rise and the political Right has been unable to articulate a real alternative to the steady decline of capitalism. Its campaigns are based more on manipulating the media and capitalizing on opponents’ mistakes than on generating concrete proposals to reverse the human and environmental setbacks created by the capitalist system.

But ALBA is not solely the creation of chavismo. Rather, it is a government-level expression of a much deeper opposition to the neoliberal model in Latin America. ALBA emerged in 2004 as a response to the U.S.-led Free Trade Area of the Americas (FTAA), which included 34 regional countries while excluding Cuba. ALBA was preceded by the continent-wide Campaign Against the FTAA, involving  organizations of workers, farmers, Indigenous peoples, students, women, professionals, faith-based communities, defenders of human rights, artists, and intellectuals, among others.

The campaign against the FTAA gave voice to widespread local initiatives against the wave of privatizations imposed by the Washington Consensus since the 1980s. Ironically, the FTAA led directly to the unification and articulation of popular discontent in Latin America—the resistance movements that spawned the region’s anti-neoliberal governments.

In late 2004, Chávez founded ALBA with Cuba—the only government that had been excluded from the FTAA negotiations. Initially, ALBA was more a cry of rebellion than a fully formed process of integration.
And while ALBA evolved, the FTAA suffered a defeat in 2005 at the Summit of the Americas in Mar del Plata, Argentina, with massive protests in the streets and Argentine President Néstor Kirchner’s remark to George W. Bush, “Don’t come here to intimidate us.” Within just a few years, locally generated integration initiatives in the region had filled the void left by the FTAA: Unión de Naciones Suramericanas (Union of South American Nations—UNASUR) in 2008; Comunidad de Estados Latinoamericanos y Caribeños (Community of Latin American and Caribbean States—CELAC) in 2011; and, of course, ALBA.

Since then, the governments of Bolivia, Nicaragua, Honduras, and Ecuador have joined ALBA, strengthening it as an anti-neoliberal political alliance and as an integration process not based on free competition or the free market. In the absence of Chávez, ALBA’s leadership must act more collectively to maintain the alliance’s forward progress.

Building on these strong partnerships, ALBA has achieved important advances in literacy, public health, mutually beneficial and equitable trade, the generation of sovereign and unconditional sources of financing, and the creation of new payment mechanisms. But ultimately, the key to progress in Latin America is not ALBA itself, but rather the continuity and enhancement of the social movement against neoliberalism—of which ALBA is one expression.

The outlook for the region’s social movements and for ALBA countries in particular is complex. It will be important to resist aggression, consolidate achievements, correct errors, and move forward while truly overcoming the pitfalls of the capitalist system. The “Vivir Bien” philosophy that comes from Indigenous movements in Ecuador and Bolivia is one example of a new social structure that emphasizes equality and respect for the environment. The processes of change in ALBA countries have been successful in redistributing nationalized economic surpluses among the poor.

But much remains to be done to break from capitalism’s model of natural resource extraction and wasteful consumption.

Neither ALBA nor any Latin American government can build a society that is fully just, equitable and environmentally responsible in the midst of capitalism’s global crisis and decline.

The fate of Latin America is intimately bound to social struggles in Europe, the United States and Asia. If the big banks and multinational corporations are able to dismantle the collective achievements of the European working class, a new “consensus” will seek to impose itself on the planet. But if the European social movements defeat this latest capitalist assault, they will open a new era of possibilities for initiatives like ALBA and for the development of alternatives.

Projects such as the Trans-Pacific Partnership (TPP) aim to revive the FTAA and extend it to Asia, beginning with the inclusion of “friendly” governments. The European Union is promoting a new wave of free-trade agreements and negotiations, one of which will allow it and the U.S. to rejuvenate their multinationals. The fate of these initiatives will be decisive for the emergence of alternative social movements.

Still, while ALBA lacks the ability to change power structures globally, it has the potential to be an alternative reference point amidst growing discontent toward the global capitalist system. To this end, unity will be necessary to overcome the impending reactionary attacks following Chávez’ death, to support the mobilization and autonomous organization of social movements, to earnestly recognize and correct errors, and to remain true to our demands for sustainable consumption models that overcome the patterns of exploitation and respect the rights of Mother Earth.

Despite its pretensions, the alliance was held together primarily by oil largess that can’t last.

Will ALBA outlive Hugo Chávez? No.

ALBA was created by the late Venezuelan President Hugo Chávez in 2004 to serve as a grand and high-profile rejection of the United States–proposed Free Trade Area of the Americas (FTAA) and, more generally, of international capitalism.  Instead of basing trade on supply and demand, ALBA countries would use social consciousness and human rights as their criteria, with the aim of ushering in a new era of hemispheric harmony.  ALBA currently has eight full members and two guest members.

Whether ALBA will continue to exist in any meaningful way now that Chávez is no longer leading it depends on the incentives of chavistas at home and member states abroad to remain committed. Even if  the chavistas hold on to power through Chavez’ designated  successor, Nicolás Maduro, the outlook for ALBA is not good.

ALBA was an important component of a strategy aimed at  fostering broad Latin American and Caribbean cooperation while consciously excluding the United States. In theory,  it would bring to fruition Simon Bolívar’s long-standing dream of regional unity, at least as Hugo Chávez envisioned it. A key unifying factor would be the member governments’ common stance against U.S. imperialism.  As its founding declaration puts it, the alliance is based on solidarity “without egoist nationalisms.”

That is a tall order.  Rejecting nationalism means that states act without regard, or at least with minimal regard, for their own interests—and without much concern for domestic public opinion.  It’s hard to find any state in the world that has successfully operated in such a way, and none of the ALBA member states has a long history of cooperation.

Participation in ALBA requires that member governments accept both the alliance’s ideological stance and—presumably even post-Chávez—Venezuela’s domination of it. That is simply not realistic. Honduras joined in 2008 under President José Manuel Zelaya and then left in 2010 after he was deposed and replaced by a more conservative president. Any shift toward the political Right in member countries will likely entail leaving ALBA.

In practice, ALBA is far less grand than its rhetoric. It has primarily been held together by oil funneled by Chávez to small countries at preferential terms in exchange for political support. Venezuela has exchanged roughly $12 billion in oil in this manner. If this arrangement were terminated and oil were sold at market rates, there would be little incentive for current member states to continue participating.

Grand or not, ALBA cannot function without a long-standing commitment by the Venezuelan government to fund its activities.  Without much of an actual agenda, ALBA’s longevity will depend on both the will of the Venezuelan president and the strength of the Venezuelan economy.  Other potential replacements, like Ecuador’s Rafael Correa, have shown little interest in taking on the mantle, and even if Correa did want to, he lacks the petroleum reserves that allowed Venezuela to bankroll the alliance.

So, with Nicolás Maduro as president, Venezuela’s support for ALBA is temporarily assured. But without Chávez’ authority and micromanagement to hold the disparate elements of his movement together—ranging from the military and community groups to leftist parties—splinters have already started to form. Competing chavista factions will not necessarily support providing handouts to other countries;  in fact, many future leaders will be more interested in using shrinking resources to consolidate power instead.

The economy will play a critical role in these political calculations. In February 2013, the government devalued the bolívar 32 percent against the dollar, reflecting serious economic problems.

The devaluation was intended to provide the government with more bolívares for the dollars it brings in from oil. Yet it also has an adverse effect on the poor, who now face higher prices for imports, including basic foodstuffs. Even before the devaluation occured, Caracas was the most expensive city in the Americas and the ninth-most expensive in the world.

Add to this the fact that the country is already suffering from high inflation, a soaring homicide rate and a large black market for dollars. These affect the daily lives of all Venezuelans. Forging policies to solve those problems will be a priority for Maduro.

In a 2011 letter to the United Nations, Chávez wrote that ALBA “advances as an avant-garde experiment of progressive and anti-imperialist governments, seeking ways to break the prevailing international order.” The avant-garde, however, will inevitably bow to political and economic realities. Impending economic troubles will make Venezuelans less keen on footing the bill for any alteration of the international order.

Given the realities of the domestic economy and the difficulties of transferring charisma from one leader to the next, Maduro will not enjoy the political capital necessary at home to follow the same ambitious path as his predecessor.

With a high probability of flagging enthusiasm for ALBA both at home and abroad, and without Hugo Chávez’ guidance, there is little reason to believe it will continue in any consequential manner in the late president’s absence.