On April 12, 1974, José Elías de la Torriente was sitting in his home in Coral Gables, Florida, when he was shot and killed by an unknown assailant firing through the living room window. Torriente, a prominent local businessman, had crossed Miami’s Cuban exile community after failing to follow through on plans to invade Cuba and overthrow Fidel Castro. His death marked the start of a period of political violence that would lead the FBI to call Miami the terrorist capital of the United States.

Though it’s largely forgotten today, some Cuban-American exile groups in the mid-1970s were responsible for one of the most impactful waves of terror in U.S. history. Authorities in that period tied them to 113 bombings on U.S. soil, killing around a dozen people. In 1974, Cuban exiles accounted for 45 percent of all terrorist bombings on the planet, according to José Luis Méndez’s Los Años del Terror. While some attacks were intended to attract public attention more than cause physical harm, that wasn’t always the case. The most infamous example came in September 1976, when the New Jersey-based Cuban Nationalist Movement (CNM) worked with the Augusto Pinochet dictatorship of Chile to car bomb former diplomat and activist Orlando Letelier in Washington. Both Letelier and his colleague, Ronni Moffitt, were killed.

What’s remarkable about this period of violence is the support it garnered from many Cuban-Americans, sometimes coerced but often given enthusiastically. The stories the terrorists propagated about themselves resonated among many exiles. Today, they help illuminate the decades-long gridlock in U.S.-Cuba relations.

The CIA Made Me Do It

In the early 1960s, Fidel Castro’s burgeoning partnership with the Soviet Union set off alarm bells in Washington. The CIA contracted thousands of exiled Cubans to invade their homeland, or at least sabotage the revolution’s achievements. But after the failed invasion of the Bay of Pigs, and then-President John F. Kennedy’s promise not to invade the island following the Cuban Missile Crisis, CIA money to the exiled Cubans dried up. Without government support, these erstwhile counter-revolutionaries morphed into terrorists. CIA recruits such as Orlando Bosch and Luis Posada Carriles angrily turned against the agency.

“I felt betrayed by the Kennedy administration and by the CIA,” Bosch recalled in a 1977 interview with New Times magazine. “They held out a dream to us and then let us down.”

Bosch and Posada both had contact with Fidel Castro as medical students, but later grew disenchanted with the movement. They were among those to embark on a terror campaign that targeted defenders of Castro’s revolution and exiles who simply preached more peaceful engagement with the regime.

As bombings and assassinations shook cities like Miami, however, it was clear that their actions were intended for a wider audience.

“Terrorism is a necessary evil in the fight against Castro,” Bosch would later say. “There are times when you cannot avoid harming innocent people.”

The terrorist groups of the period could not have waged their campaign without broader support. With no federal funding in the 1970s, anti-Castro groups turned to the half-million Cuban exiles in Miami (and their 8,000 businesses) to raise funds through memberships in social clubs, dances and raffles. Some wealthy émigré doctors shared their fortunes “so as to feel part of the anti-Castro movement,” according to a New York Times account of the era. With that money, exiles financed publications, community programs, college protests and agitprop.

A similar dynamic took shape around Bergenline Avenue in New Jersey. By the 1970s, there were a quarter of a million Cubans in the New York–New Jersey area, the second-largest concentration after Miami. Half of Union City’s 70,000 inhabitants were Cuban, and in neighboring West New York, Cubans had grown from 0.1 percent of the population in 1960 to 51.1 percent a decade later. Tabloids around Union City had titles such as War, Struggle and The Nationalist.

When pressed, the CNM and other groups used extortion to raise funds. “Businessmen established a network which would collect money in the form of ‘taxes’ from all segments of the Cuban community,” an FBI report on Cuban-linked violence said at the time. The bureau suggested that such extortion netted $100,000 per year. One Union City shop owner explained the process: “Los nacionalistas come and demand money. If (we don’t) give, they smash in the window. This window was smashed three times,” he said, pointing to his storefront. Were people scared? “Yes.”

Fear also bred silence. When the FBI asked around New Jersey, few people talked. “The community is hesitant to cooperate with the police and federal agencies,” agents wrote. “They do not want to become involved, and feel more strongly about the Cuban cause than what they consider technical violations of the U.S. law.” A Dade County investigator agreed. “Many of the people involved in the groups themselves are afraid that if they do tell us that they themselves or their family will be injured in some manner.” 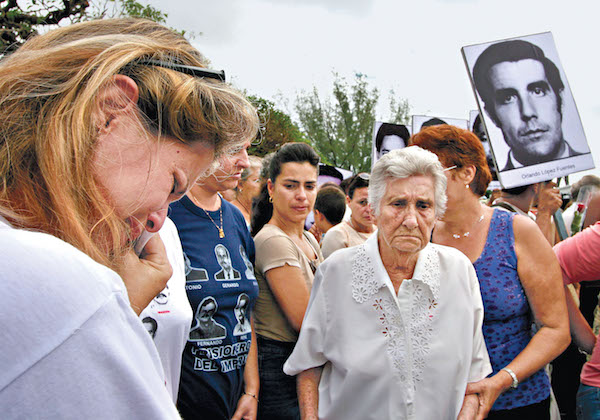 Coerced or not, money flowed openly into terrorist coffers. In Union City, some anti-Castro publications received tens of thousands of dollars per year through official advertisements from the city government. Julia Valdivia, officially an assistant to the mayor but known as “the lady mayor,” backed CNM leader Ignacio Novo and his brother Guillermo, whom she called “a friend … and I respected what he did.”

When the Novo brothers and Alvin Ross were indicted in 1979 in the killing of Letelier and Moffitt — believed to be the first terrorism-related charge ever filed against Cuban exiles — community support geared up. Sympathizers walked down Bergenline Avenue and demanded that shopkeepers close their doors for the day. “It was Capone-style,” one elderly neighborhood man told a reporter from New York magazine in 1979. “They put their stickers on my store window. I told them they had no right. They came back the next day and smashed my window. … Later, I sold my shop.”

During the trial, other CNM members bombed the Cuban Mission to the United Nations and Avery Fisher Hall in New York. Two days after the sentencing, a bag checked at Kennedy Airport in New York exploded, injuring four baggage handlers. Local police and FBI agents found themselves investigating groups they had long ignored — hundreds of militants in a dozen overlapping organizations, angry with Washington and hell-bent on sabotaging any rapprochement with Havana. Like most terrorists, they saw themselves as soldiers in a war in which there was no such thing as innocent lives.

A détente-era cooling in U.S. relations with Castro, and more FBI arrests, led to a decline in exile-related terror incidents in the 1980s. But community support for “freedom fighters” persisted. In 1981, Guillermo Novo and Ross were set free on bail while they awaited a retrial of the Letelier case; a group of exiles posted their $200,000 bond. Meanwhile, co-conspirators in the Letelier assassination, Virgilio Paz and José Suárez, remained on the lam until 1990, largely because they lived quiet — but not underground — lives in Cuban-American communities in Florida. When Suárez was finally brought in, four Spanish-language radio stations in Miami held a 12-hour fundraiser for him that raised $30,000, three times what they had collected to fight cancer and heart disease. Three U.S. towns handed him keys to their city.

Times did change. By the 1980s, the Cuban-American National Foundation modernized exile politics, filling its ranks with sophisticated strategists, pollsters and fundraisers and finding peaceful roles for former terrorists. But its power in Washington still infused national politics with the same attitudes that fueled support for terrorists in the 1970s.

That support carries consequences today. The violence is gone, but radical views on Cuba — as long as they are anti-Castro — remain part of mainstream American politics.

McPherson is the Thomas J. Freaney, Jr., professor of history at Temple University. He is writing a book about the Letelier assassination.