It had been a particularly violent day in El Salvador when Maynor walked into a Mister Donut at 7 p.m. sharp for an interview.

When the country makes international news, it’s often because of the pandillas, the gangs. That Wednesday morning in March, a shootout left six people dead in downtown San Salvador; later that evening, another nine died in a clash between police and gangsters.

For Maynor, like for most Salvadorans, it was a day like any other: He was just trying to get on with life. He’d spent all night at a hostel where he works as a janitor and caretaker for $300 a month; he’s held a job since he was 14. His father, an unlicensed taxi driver, and stepmother care for five younger kids and a baby, and need his help with the bills. After his shift, he’d gone to high school. By the time he walked into the food court of a mall in Antiguo Cuscatlán, in the outskirts of San Salvador, he was tired — but right on time.

More: Sports as a reprieve from violence and crime.

Looking over the menu, he passed on the donuts for a chicken tamal, and chatted while he waited.

Between school, work and the evangelical church he attends on Saturdays and Sundays, his free time is scarce. But what he has, he devotes to his first love — soccer.

Describing his feats as star forward on his school team breaks through the reserved demeanor and brings out a brilliant smile. He has also started a team with his church friends. The bright red soccer jersey he’s wearing, a knock-off of the Italian team Roma, set him back $14. But it was worth it: On the back, crisp white letters spell out his name.

With his food and an orange juice in hand, he sat down.

“Some kids don’t like me, they say I’m all serious,” he said, shrugging it off. “I’m just quiet. I don’t mess with anyone. I hardly go out.”

Maynor is not a pandillero, or gang member, but he grew up with them as neighbors and schoolmates. Being discreet, keeping vigilant, avoiding unnecessary outings are all part of a careful calculation meant to keep him out of trouble.

More: The violence of his community forces Maynor to make sacrifices. His professional future doesn’t have to be one of them.

So far, he has managed to avoid crossing the gangs. Last year, rumor had it the pandilla that controlled his school was going to root out any students who happened to live in enemy territory. Maynor immediately changed schools. Stories like this spread by word of mouth, feeding the population’s fear. Once it was said the gangs had forbidden women to have blonde or red hair.

Who knew where this came from? Hundreds of women dyed their hair brown anyway, Maynor said. 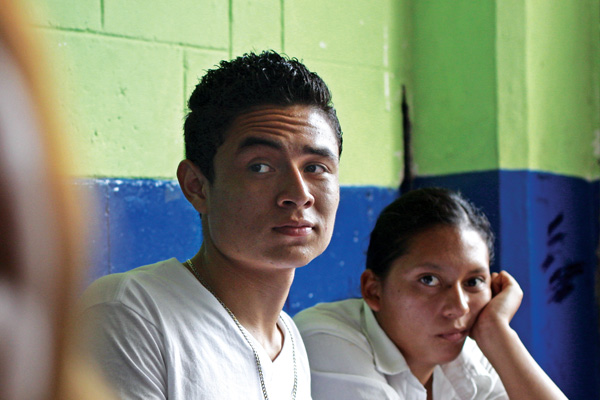 Gangs aren’t his only problem. Communities like his come with a stigma. Maynor takes precautions. The address on his ID card is that of his father’s ex-girlfriend, although Maynor has lived in the same house all his life. When a member of the Mara Salvatrucha was killed on his street, his father escorted him home, past the police officers who were rounding up men his age for questioning.

When pressed, he gives a one-word description of where he lives —“dangerous”— and changes the subject. This mall lies outside his neighborhood, but there are certain subjects he’d rather not broach.

Over weeks, Maynor relaxes, becomes more talkative — but the conversation still veers into dead ends. Discussing the gangs is risky. Talking about school makes him self-conscious. Maynor is 19, but still in the ninth grade. When his parents got divorced he dropped out for four years to help out his mother. Now he towers over his 15-year-old classmates, and stands out with his formal manner and his penchant for collared shirts. His future is uncertain. He’d like to become a graphic designer, he ventures, or maybe a car mechanic.

More: Stay in school, or help the family? A choice facing too many Latin American youth

“I don’t know if I am going to continue to study next year,” he said casually.

For now, though, he’s sticking with high school — and his soccer team. Last year, when he was new, they’d been badly beaten and came in last. Now he’s the team captain, and has been asked to read out loud the oath athletes recite at the beginning of the championship. He’ll wear his red Roma shirt, he said, flashing his brilliant smile.

Guzmán is a journalist based in El Salvador

For young Salvadorans like Maynor, sports provide a protected space away from the violence and economic insecurity they deal with regularly. But only around 10 percent of the country’s public schools have sports instructors on the payroll — an even smaller minority have access to adequate spaces for physical education. Over the past 30 years, nonprofit organizations have started to offer free or low-cost sports and physical education programs to young people outside of school hours. Our organization, for example, serves more than 40,000 children per year through its various programs. Many of these young people go on to earn sports scholarships at national or international universities; some may even get a shot at professional athletic careers. But for all of them, sports offer a means to learn about teamwork, challenge themselves and build self-esteem.

In El Salvador, violence and lack of safety remain among the largest barriers to education and youth employability. The country has one of the highest homicide rates in the world : 80.94 per 100,000 inhabitants in 2016. Young people from high-risk communities are stigmatized, making it even more difficult for them to find and keep a job. But there are ways that employers, governments and civil society can help young people like Maynor succeed: Youth development and life-skills training programs build resilience and agency in the face of adversity; vocational training programs support school-to-work transitions; partnering with and educating the private sector reduces barriers to entry for the most at-risk youth. All of these have been proven effective and should be scaled-up.

Maynor’s doubts are all too familiar for Latin American youth: Get the degree and the chance at a high-paying job, or drop out of school to work and help your family? For most at-risk youth, the economic pressure to earn instead of learn is just too strong. There is a big need for skills development programs that disrupt this dichotomy. Job training and degree equivalency programs must be dynamic and flexible enough to reach youth before they become entrenched in low-wage, informal employment. More than 50 percent of Salvadoran youth are currently stuck in this trap. More than just low wages and higher rates of poverty, this means less access to social benefits, banking services and loans, and even certain legal protections like enforceable contracts. Graduating or getting the right skills training at this pivotal age is essential — for the young person, and for the growth of the economy.