It’s not uncommon for the Castro regime to accuse dissidents of being CIA agents or puppets of the U.S. government. Viral media attacks on Cuban blogger Yoani Sánchez are not unique. However, the manner in which they attack Sánchez and other female dissidents, compared to their male counterparts, does seem unique.

Initially, the Cuban government didn’t pay much attention to Sánchez and her blogging. Not really understanding the medium, the government wrote her off as a non-threat because of her gender and ultimately gave Sánchez the space to become the international figure she is today.

Once the regime had become aware of blogging’s influence, it initiated an online civil war between independent Cuban bloggers and the government. The government blocked all of the unauthorized blogs and began a defamation campaign against the independent bloggers—who are officially referred to as “cyber mercenaries” and enemies of the revolution. Cuba’s version of Wikipedia, EcuRed, describes Sánchez as “Cibermercenaria y bloguera cubana” next to a menacing-looking photo of her.

Numerous websites exist solely to insult and question Sánchez’s legitimacy as a renowned journalist, writer and blogger. These insults and accusations are mostly gender-based. Male bloggers’ accomplishments and awards are rarely questioned. Instead, they are labeled (if at all) with epithets associated with a dominant form of masculinity, such as “terrorist” and “traitor.” Meanwhile, the language used to attack Sánchez focuses mainly on her appearance and stereotypes associated with being female.

The main tactics used to defame Sánchez are centered on her looks—as shown in the photos above from the Cuban blog “Cambios en Cuba” (“Changes in Cuba”), which implies that Sánchez’ true motive for traveling abroad was to change her appearance.

Beyond the above photos, there are many other pictures of Sánchez circulating online.

Pro-Castro bloggers also try to emasculate Sánchez’ husband, Reinaldo Escobar. They depict Sánchez traveling the world, working and meeting other men while he is in Cuba, abandoned and waiting. In the eyes of pro-Castro media, these are not the proper gender roles.  In a different blog post, “Cambios en Cuba” berated Sánchez by commenting on her “new look,” alleging that she had “bathed, combed and put on makeup” for the benefit of the former Spanish Prime Minister José María Aznar, who she met during her tour to Spain in March.

Another blog, el Blog de Yohandry: Una Mirada desde Cuba (“Yohandry’s Blog: A view from Cuba”), posted the photos below, comparing the former Spanish prime minister to Sánchez’ husband and claiming that Sánchez had exchanged “one old goat for another.” 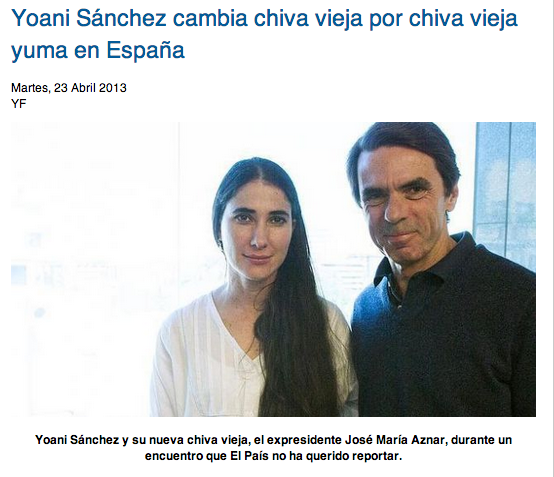 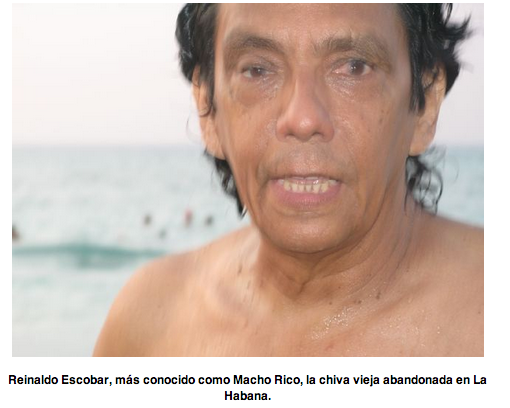 It was very hard to find similar attacks on Orlando Luis Pardo Lazo, another famous Cuban blogger who recently left Cuba, despite the amount of press attention he has received while abroad. Of all the Cuban bloggers, none are scrutinized as much and as intensely as Yoani Sánchez. Part of this can be attributed to her international fame and success, but part of it is also because of her gender.

Sánchez and other female dissidents have acknowledged this difference in the way they are treated, and have used it to their advantage. It’s one of the reasons for her fame today. At a conference on the Cuban blogosphere at The City University of New York in March 2013, Sánchez confidently declared, “Hay algo positivo de la machista.” (“There is something positive about machismo.”)