The region’s largest urban centers provide their residents with many opportunities unavailable elsewhere, but they also entail unique and sometimes seemingly intractable challenges.  Understanding how citizens perceive urban problems and local leaders is vital when attempting to comprehend broader trends of political and economic stability in the region.

There are many important questions related to these themes. For instance, how much do Latin Americans who live in the region’s major urban centers trust their local governments? What percentage of urban residents report being victimized by crime? What percentage of urban residents report participation in their community? How are these indicators related to each other?

Data from LAPOP’s 2012 AmericasBarometer regional public opinion survey provides important insights into these key questions. The study, based on over 40,000 interviews across 26 countries, includes interviews with over 5,600 residents in 18 of the largest cities in the region. The data reveal that although urbanization is a region-wide phenomenon, citizens have very uneven experiences within their respective cities and, further, that these varying urban contexts may have important consequences for citizens’ overall democratic experience.

One of the most pressing problems for Latin American urban centers is crime. How many citizens reported being victims of crimes such as robbery, burglary, assault, fraud, blackmail, extortion, violent threats, or any other type of crime in the year prior to the survey? Figure 1 presents the percentage of citizens who reported that they were crime victims in their city of residence. 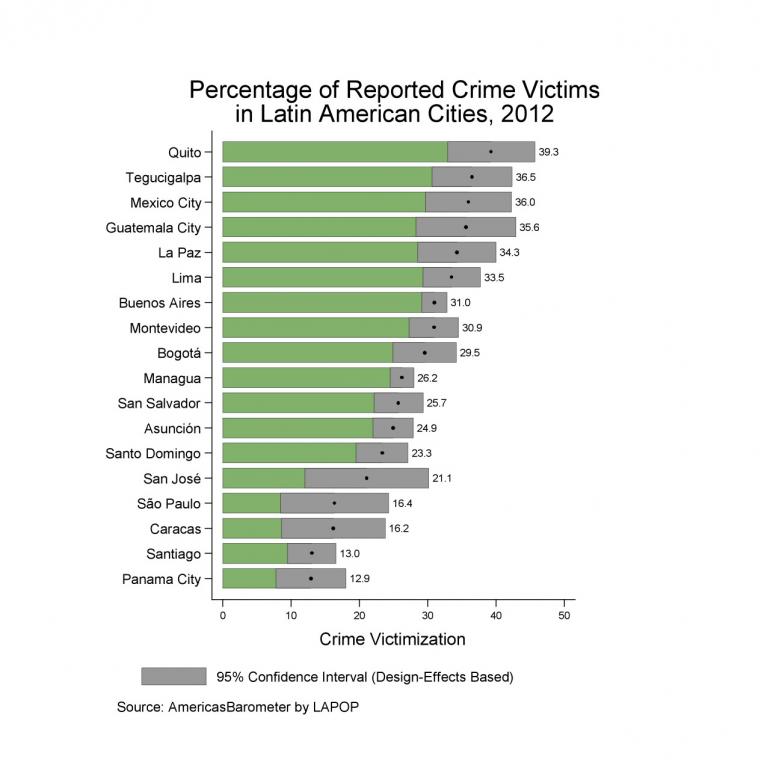 Crime victimization rates range from a high of 39.3 percent in Quito to a low of 12.9 percent in Panama City. The breadth of this range reflects the very uneven capacity of Latin American governments to maintain effective security in their largest urban capitals. The extent of the problem is of grave concern for the political and economic stability of many countries. Indeed, the State’s inability to monopolize the use of force and protect the well-being of its citizens may lead some to question the broader legitimacy of governing officials.

Figure 2 suggests that such a relationship between crime and trust in government exists. It shows the average level of trust in the local (municipal) government that was reported by respondents in each of 18 major cities in Latin America. Responses are scored on a 0 to 100 scale, where higher values represent more trust in the municipal government. The estimated scores range from a high of 59.5 in Santiago to a low of 37.4 in Tegucigalpa. Of the cities included here, those with higher rates of crime victimization also tend to show lower average levels of trust in the local government. Among the top five crime victimization cities, three are in the bottom five for estimated trust in local government: Tegucigalpa, La Paz and Mexico City. 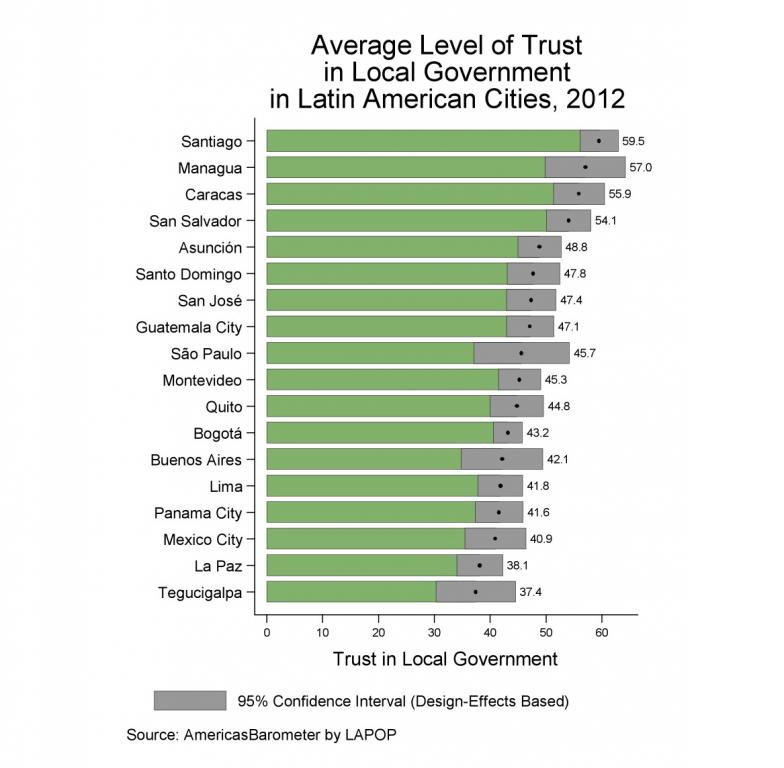 This relationship appears even more clearly in Figure 3. There is a distinct negative linear correlation between the percentage of respondents in a city who reported crime victimization and the average level of reported trust in the local government of that city. Admittedly, crime victimization is not the only factor that determines trust in the local government, which explains some of the variation around the trend line. Even so, the relationship is substantively significant and suggests that local governments may pay a heavy price in terms of legitimacy when they are unable to provide security for their citizens.[2] 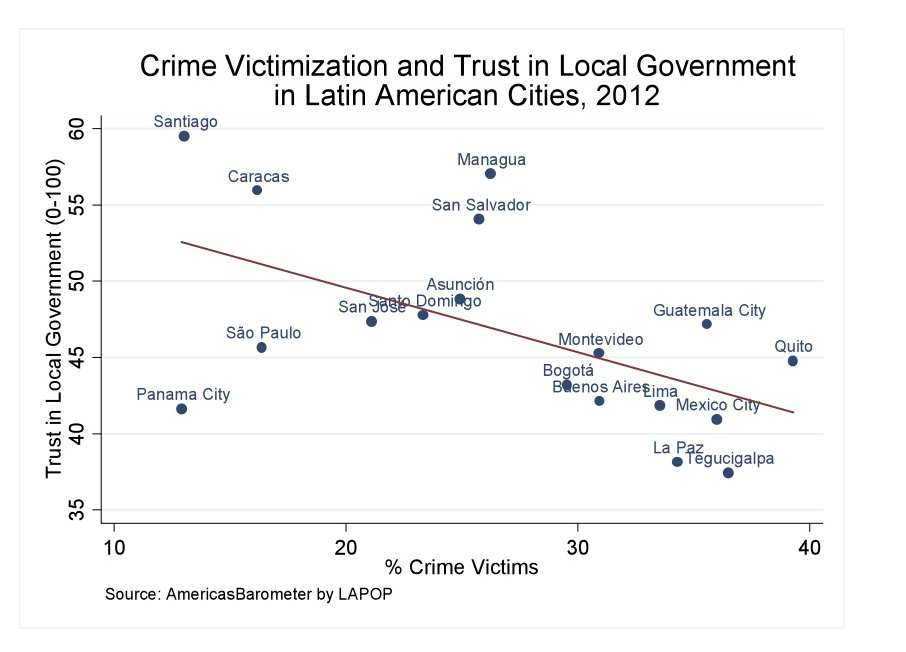 What about citizens’ participation in their communities? Given the challenges that urbanization has presented to the public and governments alike, citizen participation in community-based civil society organizations may help fill roles sometimes left vacant by the State or help meet the needs of citizens that are not otherwise fulfilled. Figure 4 illustrates the percentage of respondents in each city that reported some level of participation in a community improvement committee over the 12-month period prior to the survey. Reported rates of participation range from a high of 28.8 percent in La Paz to a low of 2.8 percent in São Paulo. 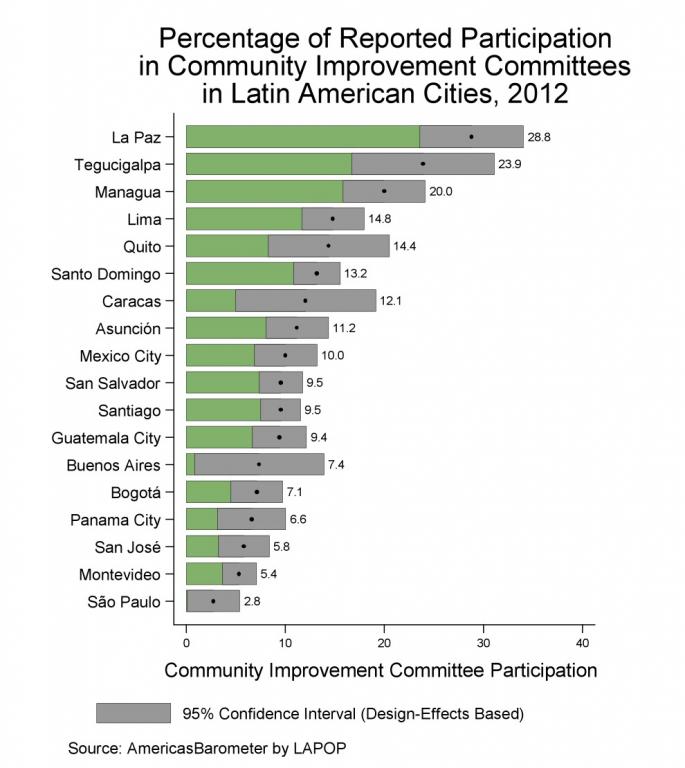 Remarkably, as Figure 5 shows, cities where the rate of crime victimization is highest also have the highest rates of community participation, on average. Although not as strong as the crime-trust relationship, this finding is consistent with the argument that citizens look for alternative ways to meet their needs when the State is weak or absent in their communities. What is more, some governments and international funding agencies have actively promoted community policing schemes in an attempt to complement State efforts to stem the tide of crime in some of the most affected countries.[3] 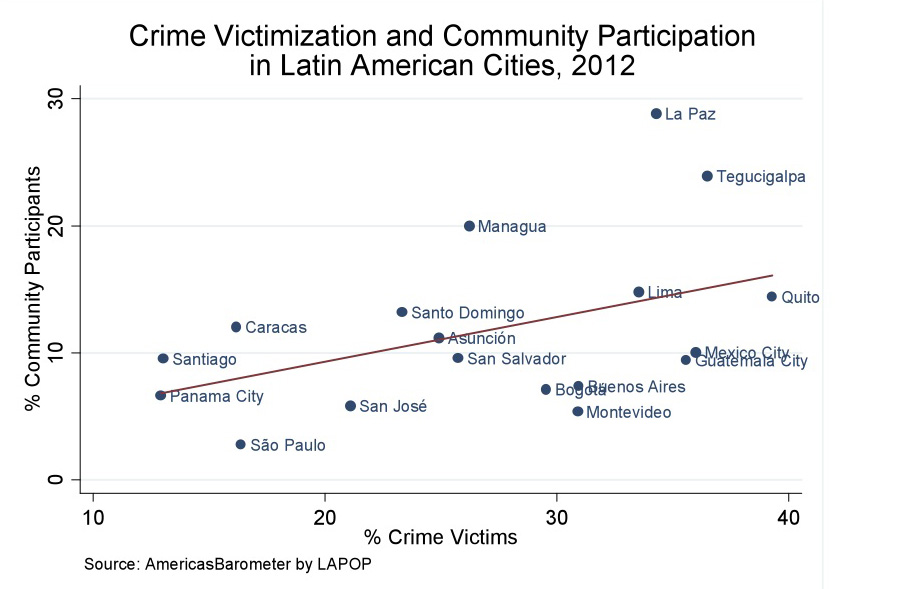 Overall, these findings show that the region-wide trend towards rapid urbanization in Latin America has resulted in widely varying experiences for citizens within their respective urban centers. The AmericasBarometer survey results suggest that for those who live in cities where crime is widespread, confidence in the government is weak and citizens may look to civil society to complement or assume the role of the state.

Perhaps the joint mobilization of state and civil society resources will ultimately prove decisive in solving the most pressing challenges of Latin America’s urban centers, including the extensive prevalence of crime. Nevertheless, urbanization will continue to pose challenges to governments and citizens alike, and they will need to continue to find cooperative means to sustain political and economic stability to help break patterns of poverty, inequality and crime that afflict the region’s largest urban populations.

*Matthew L. Layton is a PhD candidate in the Department of Political Science at Vanderbilt University.

[1] These urbanization estimates are based on data from the World Development Indicators database.

[2] This crime victimization-trust in government relationship also holds at the individual level after controlling for respondent demographic characteristics and attitudes towards the overall political system. All else equal, self-reported crime victims report lower levels of trust in their local government.

[3] This crime victimization-community participation relationship does not hold at the individual level, but this is unsurprising. There is no reason to believe that efforts to mobilize participation in community-based civil society organizations target or appeal only to crime victims.


Tags: citizen participation, Crime, governance, sustainable cities
Like what you've read? Subscribe to AQ for more.
Any opinions expressed in this piece do not necessarily reflect those of Americas Quarterly or its publishers.