With his 2006 prose debut Bonsai, Alejandro Zambra was instantly named a writer to watch in his native Chile, a literary representative of the first generation to come of age under democracy. Eighteen years and many accolades later, his early experiment in radical concision—ten thousand words, sold as a novel—has been released in a new translation. Its subject is suitably youthful. We meet Julio and Emilia in high school, at the beginning of a torrid romance sustained by a shared enthusiasm for literature. (The relationship rapidly ends with an aborted reading of Proust’s In Search of Lost Time.)

Almost immediately, Zambra reveals how his story will end: Emilia will not survive past 30. Between the meet-cute and Emilia’s suicide, he fills in as few gaps as possible, a method marked chiefly by careful omissions and jarring shifts in perspective. We follow a series of episodes in the lives of Julio and Emilia’s friends and acquaintances until the spotlight returns to Julio himself, who aspires to be a novelist. Julio’s romance with Emilia, his reading with Emilia, and his glimpses into the lives of their friends are finally reconciled in a book of his own, also called Bonsai. In Julio’s writing, the desultory details of their lives cohere into something resembling art.

But Julio’s Bonsai and Zambra’s Bonsai are not the same book. When Julio learns that Emilia has committed suicide, his draft is already shelved. The lives of his friends, acquaintances and lovers resist Julio’s effort to contain them—but emphatically, not his creator’s.

When The New Yorker anointed Zambra “Latin America’s new literary star” in 2015, the reviewer, reigning dean of critics James Wood, made much of the book’s definition of a bonsai, both “the living tree and the container.” Challenging himself to write a book as capacious as life, Zambra rigged his container to burst. Life is conjured in the negative space—in its refusals to elaborate, in its snapshots of minor characters, and in its allusions to larger fictions. Through gestures beyond the text, he charts the territory of a much larger book, no less legible than its diminutive source.

Holding Bonsai in its slim physical form, you would be forgiven for voicing skepticism. You might judge its presentation as a “novel” a touch optimistic, or gimmicky. It does not help Zambra’s case that he has morphed, since his debut, into a lauded but shameless practitioner of high literary gimmickry. In 2014, he published Multiple Choice, an otherwise bland novel in the form of Chile’s university entrance exam.

His most recent novel, Chilean Poet (2020), is far more conventional. Vigorously promoted in the Anglosphere, its sappy dialogue and trite contrivances feel calibrated for prestige television. The high-school romance remains, but the experimental verve does not. Fair enough, perhaps—Zambra is no longer young, and no writer has ever retired on a surfeit of experimental verve.

Still, in every great marketer—from David Ogilvy, known as the “father of advertising,” to Norman Mailer, who might be the Ogilvy of letters—is planted a seed of genius. From Zambra’s seed, we have Bonsai, which may live up to its hype: a genuine novel in ten thousand words.

Chile’s young president, Gabriel Boric, reportedly counts Zambra among his favorite writers. It may be tempting, if facile, to see a reflection of Chile’s political present in the high bar Zambra’s early ambitions set for the rest of his career. Whether Boric can rise to his own challenge remains to be seen. But in literature, happily, unlike politics, we are permitted to return to promising beginnings. With the arrival of Megan McDowell’s resourceful translation, now is the time to return to Zambra’s.

Caddell is a writer in San Francisco. 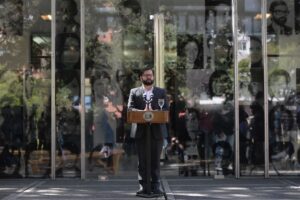 A Challenging Start for Gabriel Boric

Chile’s young president faces sinking approval, as does the constitutional convention ahead of a critical September plebiscite.

Enter the Millennials: Latin American Politics Will Never Be the Same

The new generation must escape the pull of the established left and right – and resist the urge to dominate.

Tags: Chile, Cultura, fiction, Literature, Millennials in Politics
Like what you've read? Subscribe to AQ for more.
Any opinions expressed in this piece do not necessarily reflect those of Americas Quarterly or its publishers.