MAPARAJU, Peru – Standing on a rocky outcrop some 16,000 feet above sea level, mountain ecologist John All stares intensely at the glacier that leads up to the summit of Mount Maparaju, another 1,500 feet above us.

It should form a gentle convex arc from where we stand all the way up to the peak, perhaps half a mile away. For an experienced mountaineer like him, heading to the summit ought to be nothing more than a 90-minute stroll.

Instead, the glacier surface, ravaged by climate change, has sunk so dramatically that going straight up now would entail a technical climb up a 70 degree slab of ice.

All, who since 2011 has been conducting annual surveys of the effects of global warming here in Huascaran National Park, in the heart of the Peruvian Andes, estimates that the glacier surface has dropped around 170 feet just since he was last here 12 months ago.

In other words, the volume of ice lost just over the last year would be more than enough to fill an NFL Stadium.

“What is surprising is that the rate of melting is changing so quickly,” said All, a research professor at Western Washington University and head of the American Climber Science Program. “We always knew it was not going to be linear but now it feels exponential.”

Peru is home to some 70 percent of the world’s tropical glaciers but has lost between one third and half of its mountain ice in recent years, with the high Andes experiencing outlier temperature rises similar to those of the Polar regions.

That is having serious consequences for many communities downstream that rely on the glaciers for their water.

A healthy glacier melts steadily throughout the year, providing a constant supply, while also maintaining an equilibrium between the rates of melting and of new ice forming from compacted snow. But now mountain runoff has gone haywire.

In the dry season, with much of the mountain ice gone, the streams tail off. Meanwhile, the wet season flow has increased, with precipitation that previously fell as snow instead appearing as rain – to the point where most of the water cannot be captured and is wasted.

That is creating a particular headache for SEDAPAL, Lima’s municipal water authority. With nine million inhabitants, the Peruvian capital is the world’s second most populous desert city, after Cairo. Even before climate change, it was severely hydrologically challenged and utterly dependent on Andean runoff.

With SEDAPAL still scrambling to connect the nearly one million locals, mainly living in shantytowns on the dusty margins of the city, with running water for the first time, vanishing glacier ice was the last thing it needed.

As a result, the agency is planning to invest 22 billion Peruvian soles (nearly $7 billion) in infrastructure over the next four years to extend its system of reservoirs in the mountains high above the city.

“It is difficult, tough and very expensive to supply Lima with water. Those who have water have to show solidarity with those who don’t,” SEDAPAL President Rudecindo Vega told AQ, repeating the agency’s mantra of calling on customers to use water as efficiently as possible.

Back on Maparajau, the glacier resembles, in All’s words, a “terminal cancer patient.”

As we inspect it up close, we see rivulets running down the surface. This is in the southern winter, on an overcast day straight after a snowstorm that had us trapped in our tents all morning.

Then there are the large hollow sections as the glacier melts from within. Ice caves are common in some glaciers, but not usually here. As the bottom of the glacier melts where it rests on the rock, hollows are created that are then rapidly opened up by the wind.

The snowstorm and unusually balmy temperatures make the glacier surface soft and sticky enough that crampons are not even necessary as we explore this vast frozen river.

It is also strewn with blocks of ice, some of which All estimates at up to 15,000 years old. These have broken off from another glacier, just above our high camp, crumpled and serrated by climate change into enormous daggers of ice pointing upwards at weird angles.

All chips away at one of the blocks, the size of a fridge. It has a black line cutting evenly through it, a telltale sign of some prehistoric volcanic eruption.

One of the ironies is that as the ice melts we are also losing valuable climate data stretching back over geological and evolutionary time.

Tiny air bubbles provide irreplaceable time capsules of the earth’s atmosphere from the moment they were trapped in the ice. The evidence they contain includes oxygen isotopes, dust, methane and carbon dioxide; all vital clues to allow scientists to establish baselines for the earth’s climate

The melting is also having some unexpected impacts on local communities. Peru is a global mining power for good reason: its mountains are laden with metals. Now, vast swathes of newly exposed rock are leaching their naturally occurring but toxic minerals into mountain streams, poisoning water sources thousands of feet lower down.

Rivers that should be either crystal clear or dark with benign sediment have been turned ochre red by iron, lead, aluminum, manganese, arsenic, boron and nickel, among other heavy metals. 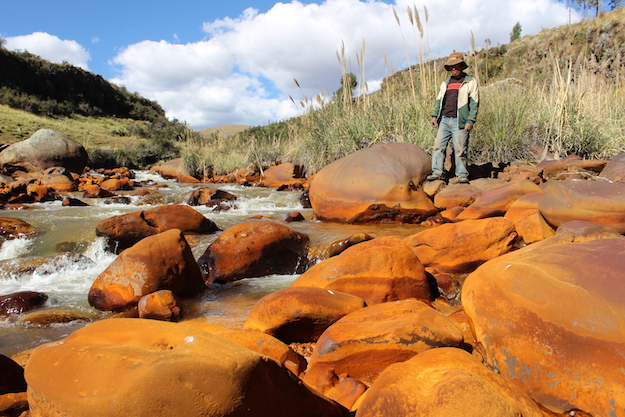 In the village of Cordillera Blanca, far below Maparaju, the community has had to build a bioremediation plant to treat the water it uses to water fields. The system includes several pools that allow the metals to sink to the bottom and then three small wetlands packed with reeds.

The project was funded with $15,000, some of that from USAID, and has stopped local crops, including alfalfa used to feed guinea pigs, a local staple, and potatoes, from being poisoned by the minerals.

Locals now use wells for their own potable water but some, especially kids, still drink from the red stream churning past their village, suffering fever, diarrhea, headaches and vomiting as a result.

One person concerned that climate change’s impacts will only intensify is Fructosa Cruz, 63, a local grandmother of nine. “The pachamama is changing,” she said, using the Quechua word for “mother earth.” “I pray it doesn’t get worse. If it does, I don’t know how we will survive.”

Tegel is a journailst based in Lima, Peru