Over the past decade, academics and the Venezuelan opposition have rightfully bemoaned China’s heavy bet on President Hugo Chávez’s Bolivarian Revolution. Beijing’s oil-backed loans lacked transparency and were unsustainable, as Caracas tragically committed future oil exports to China while failing to use the resulting money to invest and increase production. Overall, the policy was a disaster, enabling irresponsible macroeconomic decisions that led to the worst collapse in Latin America’s recorded economic history.

With an outstanding balance of $19 billion, it is highly unlikely that China will ever get repaid in full. Venezuela’s external debt is now more than six times its total exports, and this ratio is going to get significantly worse with the recent oil sanctions imposed by the U.S.

Following a catastrophe like that, can China still play a positive role in rebuilding the Venezuelan economy after Nicolás Maduro falls? I think it can — in fact, China’s support will be essential for the long-term recovery of Venezuela. However, first Beijing needs to significantly change its approach to Caracas. 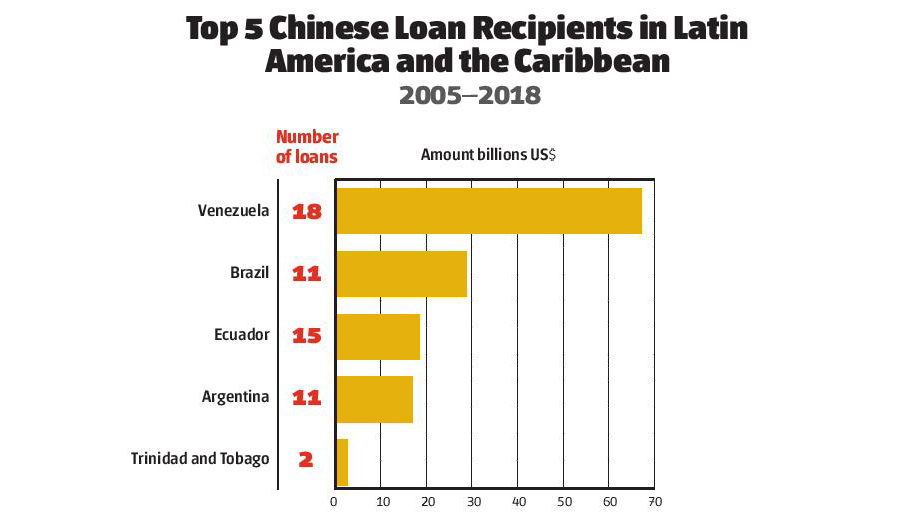 A generous and careless lender

From 2007 to 2017, Beijing provided more than $60 billion in financing — mostly to the Venezuelan central government and largely backed by oil exports — making Venezuela the destination of more than 40% of total Chinese lending in Latin America. Initially, loans were not conditioned on performance. Yet the overwhelming evidence of unproductive and wasteful spending, combined with the political uncertainty produced by Chávez’s illness and later death, changed China’s approach.

Since Nicolás Maduro’s rise to power in 2013, the Chinese government has not offered additional credit lines, only renewing some of the preexisting ones. Moreover, the limited new lending was restricted to joint ventures with Chinese companies and almost exclusively for oil extraction.

After the 2014 collapse in oil prices, Venezuela began to de facto default on China by not sending enough barrels of oil to pay off the debt on schedule. Eventually, in 2016, China gave a hand to Caracas by offering a two-year grace period, in which Venezuela only needed to pay interest on the outstanding debt. This relief period expired last year and China did not renew it. Since then Venezuela has been shipping to China more than 300,000 barrels per day — over a quarter of total exports — to pay its debts.

In fact, only about 30% of Venezuela’s oil production generated cash flow. The rest was used to pay-off debts or was given away — either in the domestic market or in exports to allied countries (mostly Cuba). Partly as a result of this cash crunch, Venezuela’s production collapsed to less than half of what it was in 2015, reaching 1.2 million barrels a day in December 2018.

In contrast to Russia, China has been very cautious in dealing with the current Venezuelan political crisis, signaling that it would work with any government in developing a long-term cooperation strategy. Once a leadership transition takes place, China could play a constructive role in supporting a multilateral-led macroeconomic stabilization program, which would include significant debt restructuring.

Beijing should remain one of the leading investors in the Venezuelan oil industry. The largest oil importer in the world has much to benefit from a significant presence in the nation with one of the largest hydrocarbon endowments on the planet. Moreover, as Canadian heavy crude and U.S. production displaces Venezuelan oil from the U.S. market, India and China will become the leading markets for Venezuelan oil exports.

To produce 3 million barrels per day, as it did at the beginning of this decade, the Venezuelan oil industry will require more than $15 billion in yearly investments over the next 10 years. PDVSA, the Venezuelan state owned oil company, would only be able to invest a small fraction of this amount. Most of the money will have to come from foreign companies. Chinese (and Indian) firms can play a key role in developing Venezuela’s massive extra-heavy oil reserves. Western companies are not eager to develop that type of resource, and refineries in China and India are among the few potential buyers for it.

For this to work, Chinese investments in Venezuela need to be much more transparent and accountable. Beijing must also be more directly engaged in guaranteeing that investments are efficiently allocated, generating Venezuela a return to pay back loans. On the opposite side, Caracas needs competitive and transparent bidding processes to attract Chinese investments and funding, on a level playing field with Western companies and development banks.

It is hard to imagine two countries that complement each other so well wasting the opportunity for a long-term strategic collaboration — even if it means turning the page on the current fiascos.


Tags: China and Latin America, China and Venezuela, Maduro, Venezuela
Like what you've read? Subscribe to AQ for more.
Any opinions expressed in this piece do not necessarily reflect those of Americas Quarterly or its publishers.