I always say that piracy is the ransom of success. If you make a better product, people will try to counterfeit it; the more innovative the product is, the harder they will have to try, but try they will.

At Philip Morris International (PMI), we have very publicly announced our vision to stop selling cigarettes. We now have smoke-free products that offer people who won’t or don’t wish to quit a much better choice than cigarette smoking. But this vision comes with new threats not only for our business, but also for consumers and society as a whole.

While this industry transformation has created new intellectual property rights for criminals to infringe, our experience with cigarettes has shown us just how extensive the problem is. From diamonds and timber to oil, tobacco and wildlife, criminals do not discriminate in the goods they trade illegally every day. Criminal networks smuggle illegal goods across borders, establish illegal operations in poorly monitored Free Trade Zones and disrupt legitimate online businesses, destabilizing communities and countries around the world.

The OECD estimates that trade in counterfeit and pirated goods alone is an almost $500 billion business a year globally and the number continues to increase.1 In short, illegal trade is now becoming an obstacle for innovation and has grown into a problem too large for policymakers to ignore. 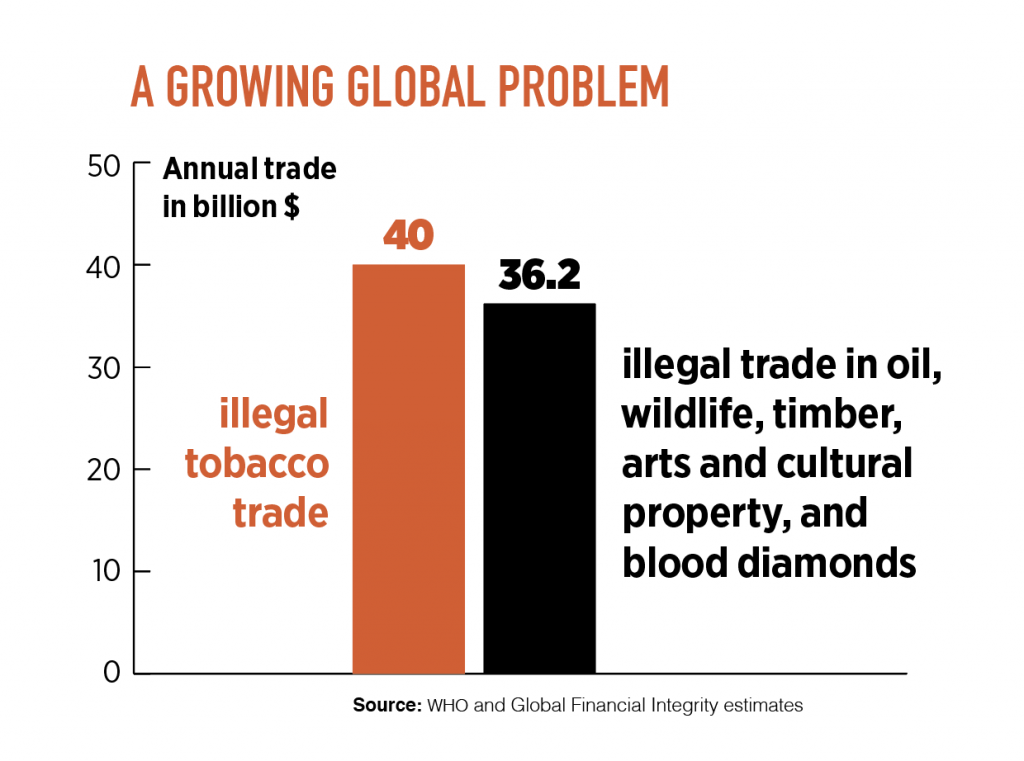 Latin America is no stranger to this problem. According to KPMG’s Project Eos,2 15.6 percent of the cigarettes consumed in the Americas are illegal, representing a volume of almost 40 billion illegal cigarettes. And governments in the region are losing an estimated $4.6 billion in tax revenue every year due to the illegal tobacco trade.

Did you know that illegal tobacco is used as a vehicle to launder dirty money from drug trafficking,3 to fuel organized crime and terrorist groups,4 and, like any other criminal activities, to further corrupt institutions across the Americas? This is why we have a fundamental business imperative to safeguard and protect all of our products, while collaborating with other industries, governments, and international organizations. PMI is working tirelessly to eradicate illegal trade.

By avoiding taxes, illegal tobacco products are vastly profitable. Illegal tobacco is a low-risk, high-reward product that criminal organizations, especially in Latin America, have turned into a major and growing source of income.

The U.S. government has also recognized that the illegal tobacco trade has turned into a threat to national security, since it “is a lucrative crime for some terrorist groups and a potential revenue source to finance acts of terror” and it “facilitates other crimes and provides funding for additional criminal activities, including money laundering”.5

Free Trade Zones (FTZs) help to foster international trade. Unfortunately, the same conditions that attract legitimate companies also appeal to criminals, particularly those trading counterfeit products or excisable goods such as tobacco. For example, criminals based in Panama’s Colon Free Zone supply up to 80 percent of all illegal cigarettes consumed between the Rio Grande and the Amazon rivers.

On the other hand, the advent of new smoke-free products has also created new battlefields, as well as unknown enemies. New players in the illicit trade arena intend to smuggle smoke-free products, mainly through e-commerce platforms and social media channels. And this is happening in Latin America.

What can be done?

Enablers of illicit trade, such as vulnerabilities in FTZs, need to be addressed by implementing regulations to control the movement and transaction of sensitive goods and strengthening sanctions, while preserving the benefits of free trade.

Meaningful partnerships are also fundamental. All relevant stakeholders must come together, including policymakers at the national level, law enforcement authorities, international organizations, the private sector, and civil society.

At PMI, we are working to create both a world without cigarettes and a world without illegal trade, but we cannot achieve either alone. From the public and private sectors to civil society, everybody has a role to play. Genuine collaboration will be crucial, and we ask you to join us: www.StopIllegal.com.

4 International Consortium of Investigative Journalists report, “Terrorism and Tobacco”, May 2012.