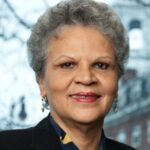 Pierre-Louis is a former prime minister of Haiti (2008–2009), the second woman to hold this position. She is the executive director of the Knowledge and Freedom Foundation, a member of the UN Secretary-General’s High-Level Advisory Board on Mediation and a former resident fellow at the Harvard Kennedy School’s Institute for Politics.