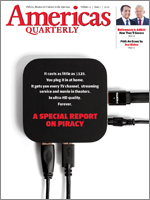 How to Stop Piracy – and Protect Latin America's Geniuses

By JONATHAN FRANKLIN
A little black box spells mayhem for the entertainment industry. Smuggled from China, it makes stealing content as easy as flipping a switch.

In Guatemala and Mexico, Two Very Different Responses to Piracy

By EMILIE SWEIGART
A look at what the region's governments are doing - and not doing - to stem piracy.

By BEN MILLER
From books to medicine, piracy affects more than just entertainment.

How Colombia Is Protecting Indigenous and Afro-Descendant Knowledge

By EDSON LUIZ VISMONA
For a safer Latin America, we should stop romanticizing piracy.

AQ profiles five Latin Americans who have come up with solutions to problems from air pollution to safety risks for Brazil's black filmmakers.

By JOE BIDEN
The case for greater engagement between Latin America and the U.S.

A New Year for Brazil and Mexico

By BRIAN WINTER
Olavo de Carvalho might be the most important voice in Brazil's incoming government. And he doesn't even live there.

How Bolsonaro Will Govern

By BRENDAN O'BOYLE
The supporters, the opposition and the priorities.

By BENJAMIN RUSSELL
An interview with historian Lorenzo Meyer on the defining moments of López Obrador's career.

How AMLO Will Govern

By BENJAMIN RUSSELL
The supporters, the opposition and the priorities.

By SEBASTIÁN ZUBIETA
Our list of warming winter sounds.

Books: The Road Ahead

By ROBERTO SIMON
A group of foreign policy planners offer their views of global diplomacy in The Road Ahead.

By BRENDAN O'BOYLE
An interview with Carlos Dada, Salvadoran journalist, founder and director of El Faro.