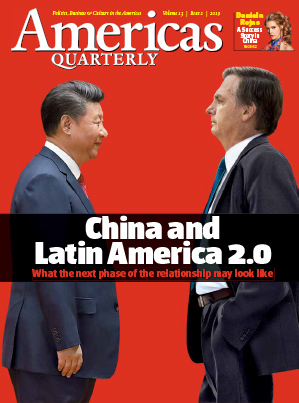 Many Latin Americans are delighted by China's growing presence – and largesse. But there is a clear need for change.

By RICHARD LAPPER
Brazil's Jair Bolsonaro talked tough on China during his campaign, but his tone has changed now that he's in office. Deep business ties help explain why.

How Governments Are Playing It

By EMILIE SWEIGART
A look at nine Latin American countries' relationships with China.

The Reasons for China's Cooling Interest in Latin America

By MARGARET MYERS
China's interest in the region has cooled – and that trend will continue, writes a leading expert on Sino-Latin America ties.

A Path for China to Better Understand Latin America

By GUO CUNHAI
Studying Latin America's culture and history would help officials better grasp the how - and why - of its politics, writes a Chinese scholar.

By BEN MILLER
A visual guide to Chinese financial interests in Latin America.

China Can Help Save Venezuela. Here's How.

By ERIC FARNSWORTH
As China strengthens ties with Latin America, the U.S. government needs to change how it trades with, and talks about, the region.

How China Is Closing the Soft Power Gap in Latin America

By LUCIA HE
A day in a classroom in Argentina, speaking Mandarin.

AQ profiles five Latin Americans who show what it takes to thrive in China.

As Latin America Goes Right, Can China Keep Its Footing?

By YANRAN XU
After years of negotiating with leftist leaders, China is learning to work with the "New Right."

How Much Does a Taco Cost in Renminbi?

By CECILIA TORNAGHI
What it takes to be a global currency.

By BENJAMIN RUSSELL
A mysteriously timed land and tax deal becomes a source of tension for China – and a sign of its growing interst in Central America.

China and the Environment: A Struggle for Change

By ROBERT SOUTAR
Chinese companies gained a reputation in Latin America when it comes to the environment. Cleaning it up will take more than solar panels.

By NATALIA MUÑOZ and LORAND LASKAI
As China fuels innovation in the region, countries must prepare to mitigate the risks.

The Risks and Rewards of China's Role in Latin America

By SUSAN SEGAL
The next chapter in this relationship would profit from looking at the recent past.

What I Learned as a Mexican in China

By PAULA MARTÍNEZ
Misconceptions about China hinder what could be a rich exchange with Latin America.

The Challenge of Doing Business as an Argentine in China

By TOMÁS FUENTES BENÍTEZ
Starting a business is already hard. Starting one in China is another story.

By PETER GORDON and JUAN JOSE MORALES
When Mexican coins circulated in China.

By BRIAN WINTER
The 2010s will be remembered as the "hangover decade" – and extended letdown from the commodities boom.

By SEBASTIÁN ZUBIETA
Our reviewer takes a fresh look at an old favorite, and recommends two current artists at the top of their game.

Film: This Is Not Berlin

By BRENDAN O'BOYLE
Love, madness and revolution in the Andes.

By ROBERTO SIMON and EMILIE SWEIGART
The fall of Chavismo, seen from U.S. courts.

By BRENDAN O'BOYLE
An interview with Laura Zommer, executive director and editor-in-chief of Chequeado.