Over the last two decades, inSite has established itself as a pioneering curatorial and artistic program for contemporary art in Latin America. In five editions held at the Tijuana-San Diego border, inSite has supported more than 150 commissions by Mexican and international artists, using the divisive space to explore issues related to migration, labor, surveillance, nationalism and military intervention. Notable contributors have included Francis Alÿs, Allora & Calzadilla, Mark Bradford, Javier Téllez and Silvia Gruner.

Throughout its history, inSite’s goal has been to document change not only regarding how the border is perceived, but also in the practice of contemporary art itself. According to Osvaldo Sánchez, an inSite curator and its current artistic director, “The successive versions of the exhibition have documented the historical development of artistic practices of intervention, ranging from urban-scale sculpture to site-specific installations, from performances to non-object-based processes and situations.”

For its sixth and current iteration, inSite relocated to the gentrifying Mexico City neighborhood of Santa María la Ribera. Under the name inSite/Casa Gallina, this latest version of the project consists of long-term residencies in which artists work in close collaboration with the local community. As was the case on the border, inSite/Casa Gallina remains outside the realm of the conventional art market, instead emphasizing creation and coparticipation within the neighborhood as an alternative to final or finished artwork. 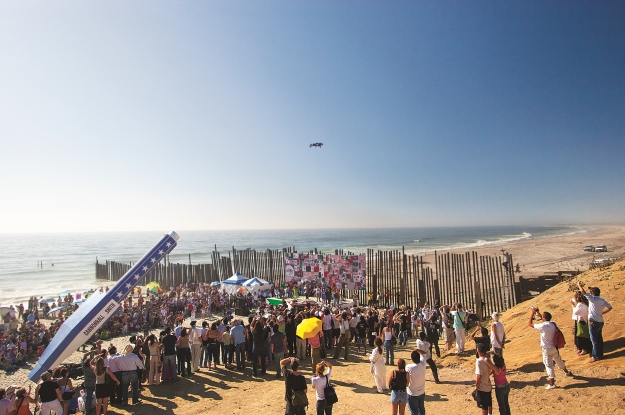 InSite 05
In “One Flew Over the Void,” artist Javier Téllez launched the world’s most famous human cannonball across the Tijuana-San Diego border, creating a parodic illustration of the tensions characteristic of the frontier. 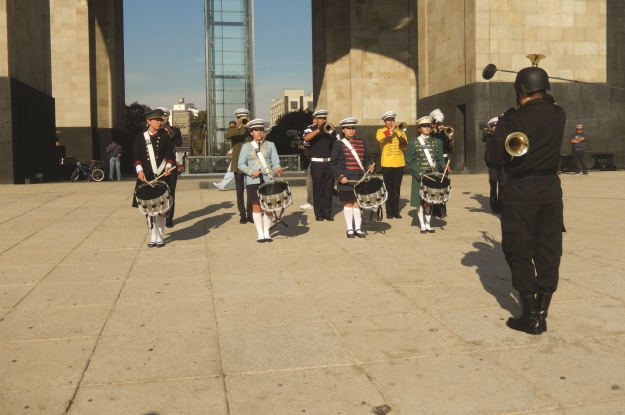 InSite/Casa Gallina
One of the first artists selected to work at inSite/Casa Gallina was Mexican multimedia artist Erick Meyenberg, who spent more than two years working with students from the Lobos Military Band in Mexico City for his latest work, “The wheel bears no resemblance to a leg.” Together with composers, costume designers and choreographers, Meyenberg and the band members enacted performances and flash mobs at the city’s Plaza de Tlatelolco and Monument to the Revolution, as well as at the students’ school and the Centro Comercial Forum Buenavista shopping mall. The resulting three-screen installation will be presented at Americas Society Visual Arts Gallery from May 4 through July 22. 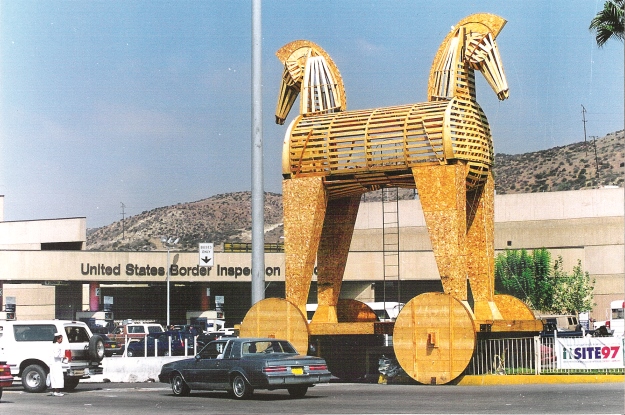 InSite 97
For the 1997 edition of inSite, Mexican artist Marcos Ramírez, known as “ERRE,” constructed a monumental Trojan horse and parked it on the Mexican side of the border crossing at San Ysidro. The two-headed horse, meant to embody the ideal of interdependence between the two countries, encouraged viewers to ask themselves from what side and in what direction the horse might cross the border. This concept is further underscored by the sculpture’s physical structure, which was composed of a wooden frame that left the interior of the horse’s body exposed, thereby challenging the notion of a concealed invasion. 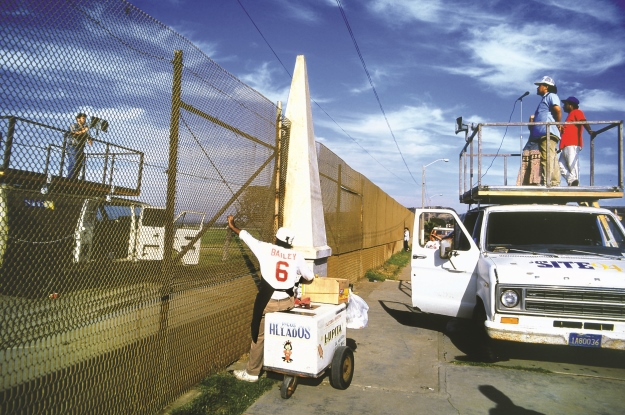 InSite 94
For 1994’s “Cross the Razor,” U.S. artist Terry Allen parked two vans on either side of the Tijuana-San Diego border. Each van housed a platform and music equipment that allowed people to connect to one another by singing, talking, or listening to music together from either side of the divide. By enabling communication through both sides of the physical border, the artist called into question the nature
of the boundary itself. 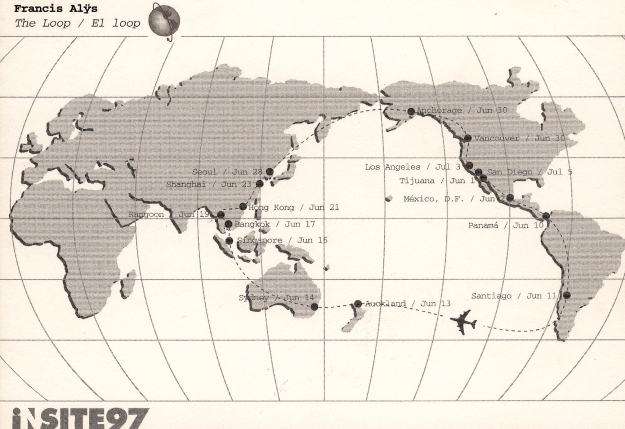 InSite 97
For inSite 97, the Belgian-born, Mexico-based artist Francis Alÿs subverted the seemingly direct line between Tijuana and San Diego by taking a journey that allowed him to circumvent the border between the two cities entirely. Using his commission fee to travel through Latin America, Australia, Asia, and into the U.S. through Canada, the artist’s “loop” charted an alternate migrant journey across the border. However, while exposing the inconsistencies of the U.S. immigration system, Alÿs’ arduous and fully compensated passage also underscored the excesses of the art world. 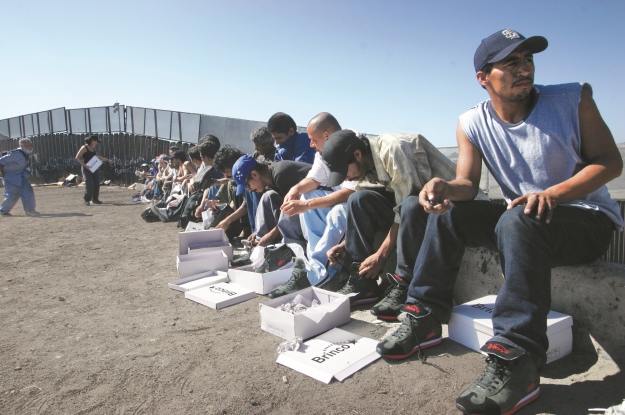 InSite 05
For inSite 05, Argentine artist Judi Werthein launched “Brinco” (Jump), a line of sneakers with built-in references to the U.S.-Mexico border, such as a map and a compass. The artist distributed the shoes through different organizations that support deported migrants, and also sold them as a limited edition in a boutique near San Diego.

Flom is exhibition and public programs coordinator and Temkin is assistant curator for visual arts at the Americas Society.