Bolivia under President Evo Morales is undergoing revolutionary change. Since it assumed power in 2006, much of the international attention on the Morales government has focused on its socioeconomic policies. But those policies may ultimately leave less of a political imprint than the transformation of the country’s governing structures. In fact, the most profoundly radical development is Bolivia’s transition from a traditional unitary state toward something resembling a federalized one—though the end point of this process remains uncertain.

Political power in Bolivia, as in much of Latin America, has been historically centralized in the national government. Subnational authorities traditionally served as agents of the executive. But during the wave of decentralization that accompanied the region’s return to democracy, Bolivia began to move toward the federal models of Mexico, Brazil, Argentina, and Venezuela.  With this year’s local and regional elections, it has become the most decentralized of Latin America’s nonfederal states.

It is now worth asking whether the results have advanced Bolivia’s democratic development or hindered it.

The movement toward a federalized structure began in the mid-1990s, when the Ley de Participación Popular (Popular Participation Law) created 311 popularly elected municipal governments (since expanded to 337) and constitutionally guaranteed them direct fiscal transfers. It also included mechanisms for grassroots citizen organizations to play direct oversight and planning roles in local government.

At the time, the neoliberal architects of those reforms argued that municipal decentralization was more effective than granting more powers to Bolivia’s nine departments, which would merely reproduce the inefficiencies of the central government.  That was a justifiable concern, since each of the departments was politically and economically dominated by its capital city. The decision to create 311 municipal governments—most of which had fewer than 15,000 residents—was a conscious effort to bring local government to marginalized indigenous and rural communities.

One of the most striking results of the law was the empowerment of a new generation of political leaders, such as Evo Morales. But just as significant, municipal decentralization along with electoral reforms that introduced a mixed-member electoral system, accelerated the decline of Bolivia’s traditional party system.

Hurtling Toward the Unknown

Under Morales, the pace of change has sped up, thanks to the new national constitution approved in 2009. While Article 1 of that constitution still declares Bolivia a unitary state, it also declares it (among other things) a “plurinational” state “with autonomies.” Essentially, the constitution now explicitly recognizes that multiple “nations” live within the territory and grants local self-government to different communities. However, none of this is defined in practical terms.

The constitution introduces a new structure for subnational autonomies that is more comprehensive and far-reaching than the decentralization reforms of the 1990s. While it enshrines departmental autonomy—a consequence of the protracted conflict between the central state and autonomy movements in the east—it also grants varying levels of political and economic autonomy to three other types of government: regions (subdepartmental units self-defined by popular referendum), municipalities and indigenous communities.

This means that Bolivia is now constitutionally divided between four equal, distinct, yet overlapping levels of autonomy, with many questions still unanswered about how this political structure will work in practice. The legislature is still working on a legal framework that will regulate the various autonomous entities. Each autonomous unit must also draft its own statute (local constitution or charter). The reality is that no one has a clear idea of how these units will relate to each other—or the central government—in practice.

Even before the enactment of the 2009 constitution, departmental autonomy emerged as the most visibly federal feature of the system. Beginning with the 2005 general elections, prefects have been chosen by popular election rather than appointed by the president. The result: in 2005, even though Morales and Movimiento al Socialismo (MAS) won a comfortable nationwide victory, opposition prefects were elected in six of the country’s departments. These prefects constitutionally still serve at the pleasure of the president, but Morales has respected opposition victories and declined to unilaterally remove members of the opposition from office.

He maintained this hands-off approach even during the tense period of 2008, when opposition prefects organized autonomy votes in the eastern lowland departments of Santa Cruz, Tarija, Beni, and Pando.  The President’s response was to organize a nationwide recall referendum for himself and eight prefects. Savina Cuéllar, the Chuquisaca prefect elected in a special election that year, was exempt. Morales won, but so did most opposition prefects.

Regional autonomy movements remain the greatest single challenge to Morales’ presidency. In the absence of a credible, disciplined or coordinated national opposition political party, regional movement leaders have been the only ones capable of mounting a sustained opposition to Morales’ government. Often, government-opposition negotiations have taken place outside the legislature, forcing Morales to negotiate with the prefects.  Since his election, every compromise he has made has strengthened the autonomists’ position. After resisting the inclusion of departmental and regional autonomy clauses in the new constitution, Morales and the MAS delegates finally caved in to the opposition and included autonomy provisions.

Then, in December 2009, in what was clearly an electoral calculation, Morales suddenly reversed position and supported autonomy referendums: in each of the five Andean departments (La Paz, Cochabamba, Oruro, Potosí, and Chuquisaca), in the province of Gran Chaco (part of Tarija department) and in 12 rural municipalities (where voters were given the chance to declare themselves an indigenous community). “Yes” won in all the referendums except for Carahuara. As a result, in April 2010, voters went to the polls in a host of autonomous jurisdictions: nine departments, 326 municipalities, 11 indigenous communities, and one region (Gran Chaco). They elected 2,511 officials.

Today, Bolivia’s autonomous departments look very much like states in a federation. Unlike municipalities, whose structures are defined by the central state, departments (and regions) are free to draft their own statutes. In the end, Morales has accepted—with little or no modification—the kind of autonomy regionalist movements had demanded.

It is too early to know whether Bolivia’s current model will continue to evolve toward a full federal model—though even if it does, the powers and responsibilities remain ill defined.  But its evolution from decentralization to devolution to autonomies offers a clear trajectory. It also suggests profound changes are underway in the country’s party system.

The Risk of Dispersion and Fiefdoms

The municipal decentralization of the 1990s was key to those changes.  Local elections served as recruiting mechanisms for party activists and as sounding boards for societal discontent, effectively bringing political parties closer to the grassroots. But the results have been mixed. Since municipal candidates were still required to run under the banner of nationally-registered parties, they remained largely under the control of central party officials who recruited them. Once in office, they concentrated on strengthening their own local power bases.

Moreover, in their rush to recruit “electable” local candidates, parties sacrificed coherent platforms and organizational discipline. They frequently recruited independent “outsiders” with little or no political experience in an attempt to appeal to niche constituencies. This encouraged party-switching, as potential candidates held out for the best offers from rival political parties. It also eroded public confidence and trust in political parties.

The picture grew even more complicated after the Carlos Mesa government (2003–2005) established two new forms of political representation: “civic groups” and “indigenous peoples.” In 1999, just 18 parties participated in municipal elections around the country. But in the December 2004 elections, 425 political organizations (including 344 civic groups and 65 indigenous communities) campaigned across 327 municipal contests. Despite the proliferation of groups, a number of faces stayed the same, as incumbent politicians jumped ship and ran as candidates for local organizations or formed new political parties. 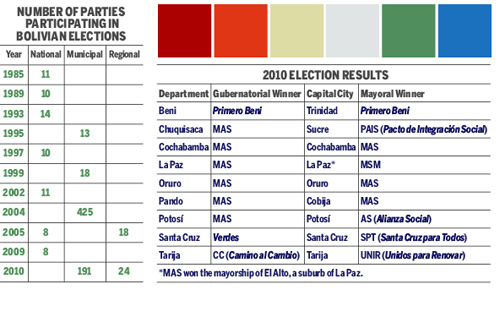 In the December 2005 elections the landscape changed again with the emergence of what appeared to be separate national and regional party systems. While just eight parties participated in the national contests for the presidency and the legislature, 18 parties, electoral alliances and civic organizations battled it out in the nine prefect elections. MAS was the only party to field candidates in all of the prefecture votes.

The four parties that won seats in the December 2009 legislative election all participated in the April 2010 local and regional elections. But several of these were themselves coalitions whose member organizations campaigned separately at the local level.

At the municipal level, MAS again showed itself as the party with the longest reach. It competed in all 337 mayoral elections this year and won 197 races (compared to 112 in 2004). But Morales could hardly have considered this a broad victory for the party: three-quarters of MAS’s wins occurred in small Andean regions and 29 were in unopposed races. The second-largest party, Movimiento Sin Miedo (MSM)—until recently a key MAS ally—won only 19 mayoral races, but this included the city of La Paz.  In fact, MAS candidates were elected mayor in only two departmental capitals: Cochabamba and Cobija (the capital of Pando). Six different parties won in the other seven capitals; MSM mayors were elected in Oruro and La Paz.

What does this mean for Bolivia’s emerging autonomies model? First, the apparent entrenchment of departmental autonomy suggests that the architects of the 1990s Ley de Participación Popular were right to be concerned about the dominance of traditional elites and their civic institutions in departmental politics, at least in the so-called media luna (the eastern lowland departments of Santa Cruz, Beni, Pando, and Tarija).  Second, increased political decentralization has done little to strengthen a national party system. Instead, each region is developing its own party system. In the four media luna departments plus Chuquisaca, regional politics is currently dominated by two relatively evenly matched parties (MAS plus a regional party).

But these regional parties do not extend beyond departmental boundaries and do not work well together to form a coherent national opposition. Sometimes parties even fragment within the region. In Santa Cruz, the governorship of the department and the mayorship of the capital city were won by two different opposition parties that did not challenge each other in their respective spaces.

Regional opposition movements have achieved their principal goal: the institutionalization of constitutionally protected regional autonomous governments. Moreover, by accelerating the process of decentralization, Morales has created a complex system of autonomies that is certain to make national governance even more difficult. Devising a legal framework for transferring competencies (health care, education, roads, etc.) and fiscal transfers from the central government to the four various subnational units will be a significant challenge.

This will be made even more difficult by the tendency for departmental legislative caucuses (or “brigades”) to cross party lines to band together in Congress to defend regional interests. A recent example is the move by MAS and opposition legislators from Chuquisaca to demand that the government move the electoral court to Sucre. The move, supported by the newly elected MAS governor and the civic organizations that backed his opponent, seems likely to reignite the conflict between Sucre and La Paz that nearly derailed the constituent assembly process in 2008.

As other unitary states look to Bolivia as a potential model, the jury is still out on whether such radical decentralization is a positive force for democracy and socioeconomic development. The elections of 2010 have revealed a highly fragmented political landscape. Decentralization can bring government closer to citizens, which is a boon for democracy. But it can also encourage a hyper-localism that makes coherent policymaking at the national level difficult. Would-be imitators will need to decide the extent to which greater participatory democracy can trump governability.