Freedom of speech remains a contested right in most democracies across the Americas. The restrictions on the freedom of the press discussed in the latest issue of Americas Quarterly have important implications for the quality of democratic rights of citizens across the region.

It is therefore crucial to understand what the public thinks about government censorship of media outlets that publish articles critical of the government.

The 2012 AmericasBarometer survey by the Latin American Public Opinion Project[1] asked 21,622 citizens in 26 nationally representative surveys the following question: “How strongly do you approve or disapprove of the state/government having the right to prohibit newspapers from publishing news that can be politically damaging to it?”

On a 0 to 100 scale, where higher values mean greater approval, Figure 1 shows respondents’ average level of support for government media censorship in each country. 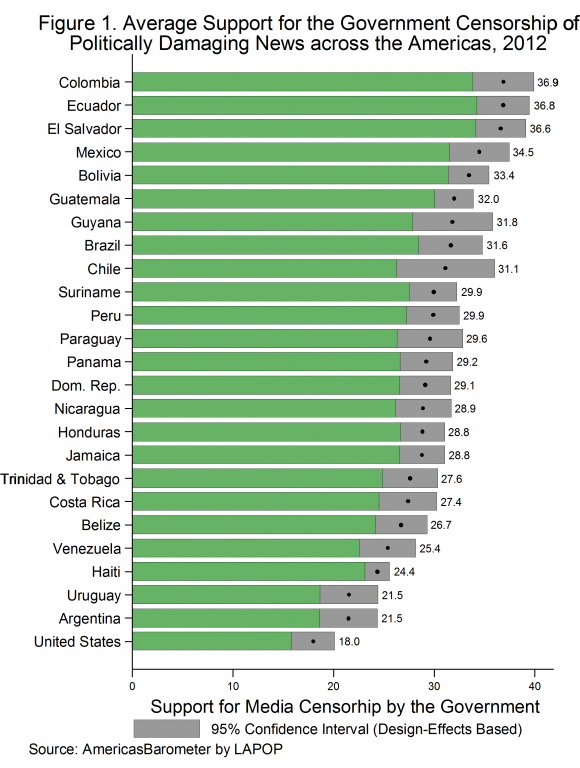 The 2012 AmericasBarometer survey data show that the highest average support for media censorship is found in Colombia (with a mean score of 36.9 on the 0 to 100 scale). Nevertheless, Figure 1 shows that the degree to which citizens support government censorship of the media varies widely across countries.

According to Figure 1, the United States displays the least support for government media censorship. In the face of recent controversial cases that have incited strong-handed legal actions by the U.S. government against whistleblowers like Private Chelsea Manning and Edward Snowden, American respondents most strongly rejected the censorship of news that could be politically damaging for the government.

Similarly, Argentina and Venezuela—countries that, like the United States, have faced recent and intense battles between commercial media and incumbent administrations—are also among the least tolerant of media censorship by the government. In these countries, privately-owned news media outlets have been particularly critical of the incumbent governments of Argentine President Cristina Fernández de Kirchner and the late Venezuelan President Hugo Chávez. Moreover, opposition media outlets have faced growing government restrictions and even shutdowns, in the case of Venezuela. Yet, Argentine and Venezuelan respondents expressed relatively strong support for media freedom.

However, in Ecuador and Bolivia—countries in which press freedom has also been increasingly challenged in recent years—support for government media censorship is relatively higher than elsewhere in the region. Respondents were also more tolerant of government media censorship in Colombia and Mexico, which have a history of traditional media market concentration in the hands of right-wing sympathizers and business conservatives.

At the individual level, what factors predict greater public support for media censorship in the Americas? A series of analyses conducted using the 2012 AmericasBarometer data revealed the following:

First, education, gender and wealth all fail to directly predict levels of support for government censorship–but age matters.  On average, across the Americas, younger citizens are less supportive of censorship of the media in the face of news that could be politically damaging to the government.

Second, media use matters. Those who consume more news and use the Internet are less supportive of media censorship. This suggests an indirect role for education and wealth, as a second set of analyses of the dataset revealed that those individuals who are more educated and wealthier tended to use media more often. This also suggests that the growing availability of news sources thanks to mobile technological innovations and the Internet may incentivize  citizens to place greater value on the freedom of news media access. It further evokes the possibility that one way to decrease support for censorship could be to increase public access to standard and online media.

Finally, support for the executive matters. Those who report greater approval of the incumbent president are more likely to defend the right of the government to censor news that could be politically damaging to the government.[2]

In conclusion, despite moves by political elites and others to restrict the media in certain cases across the region, an analysis of the 2012 AmericasBarometer survey reveals that citizens across the Americas are generally protective of the right for a truly independent and free media.

At the same time, we see clearly that those who support the president, approve of limiting the opposition, and believe in a large role for government are relatively more supportive of government censorship of the media.

This may imply that, although citizens of the Americas tend to reject media censorship, their views on media freedom can be influenced in important ways by the political attitudes expressed by the politicians and policy platforms they support.

[1] Funding for the 2012 round mainly came from the United State Agency for International Development (USAID). Important sources of support were also the Inter-American Development Bank (IADB), the United Nations Development Program (UNDP) and Vanderbilt University. This report is solely produced by LAPOP and the opinions expressed are those of the authors and do not necessarily reflect the point of  view  of the United  States Agency  for  International  Development, or any other supporting agency.

[2] The results discussed here are based on a multi-variable OLS regression analysis that takes into account the complex nature of the survey data and also includes individual country controls.

Mariana Rodríguez is a research assistant for the Latin American Public Opinion Project (LAPOP) at Vanderbilt University, where she recently received her Ph.D. in political science. She can be contacted at mariana.rodriguez@vanderbilt.edu.


Tags: Freedom of expression, Latin America, Media, Press Freedom
Like what you've read? Subscribe to AQ for more.
Any opinions expressed in this piece do not necessarily reflect those of Americas Quarterly or its publishers.