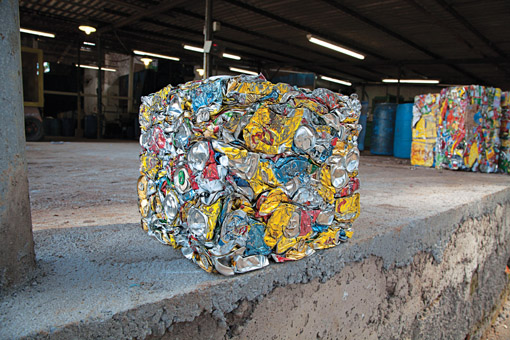 The collection and disposal of trash is a dirty job, but an essential one. While officially many of Latin America’s largest city governments manage the task efficiently—14 cities in the region remove at least 95 percent of their waste—the trash generated by informal settlements is often not included in citywide waste collection and rarely captured by city data.

However, Curitiba, Brazil—a regional leader in sustainability—has been able to bridge the gap. According to the Siemens Latin American Green City Index, Curitiba collects 100 percent of its waste, thanks to programs initiated two decades ago. The city shut down its open garbage dump in 1988, opting instead for a municipally managed landfill.

Then, in 1991, Curitiba addressed a problem common to many cities: the inability of large, conventional collection trucks to access the narrow, often unpaved streets of the city’s informal settlements. So, the city developed a program to reward residents for bringing the trash to them. Under the Câmbio Verde (Green Change) program, 7,500 residents of these communities turn in an average 2,800 tons of waste annually to numerous collection points around the city, and receive basic food staples in return.

Curitiba’s rewards-based waste disposal system has been a model for the region. In 2010, a private company called Monedero Ecológico (Green Wallet) launched operations in the Mexican city of Puebla. In return for joining Monedero’s recycling program, residents get a debit card and receive one electronic credit for every kilogram of solid waste they deposit at local schools, grocery stores and other collection sites. Cardholders can use that credit to get discounts at participating retail locations for school supplies, cell phone minutes, clothes, and food. The program handed out over 3,000 cards and collected 19 tons of waste in its first six months.

Cities are also working on initiatives to help informal waste pickers who rummage through landfills in search of re-usable or recyclable material to return for money. Starting in 1993, the government of Belo Horizonte, Brazil, began integrating waste pickers into the citywide waste management system, providing recycling points, sorting centers and trucks to transport materials. The waste pickers association, called the Associação dos Catadores de Papel, Papelão e Material Reaproveitável (Association of Paper, Carton and Recyclable Material Pickers—ASMARE), currently has 200 members, each of whom earn an average monthly income of 1,700 reais ($800) by selling recycled material and the artisanal products they create using those materials.

Bogotá, meanwhile, turns its waste into energy. In 2007, the city government started collecting and processing the methane gas generated at the Relleno Sanitario Doña Juana (Doña Juana Landfill), where 2 million tons of municipal solid waste are disposed of each year. Vertical drains under the garbage piles vacuum methane gas and transport it to a processing plant, where the gas is incinerated at 1,000 degrees Celsius (1,832 degrees Fahrenheit) or fed into an internal combustion engine to create electricity that powers on-site equipment.

By eliminating methane—a potent greenhouse gas—from the environment, the project is expected to save 14.8 million tons of CO2 emissions between 2009 and 2016, according to C40 Cities.

Waste disposal may not be glamorous, but it offers opportunities for shrewd environmental management and, in some cases, even employment and poverty alleviation.

Richard André is a policy associate at Americas Society and Council of the Americas (AS/COA).