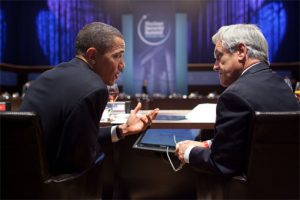 Obama’s Moment to Get It Right in Latin America

Amidst nuclear meltdown in Japan, growing pressures to respond to the carnage in Libya and the specter of a possible U.S. government shutdown, flitting rumors have circulated that the visit of President Barack Obama to three Latin American countries may be cancelled or postponed.  This would be a major setback in U.S. relations with the … Read more

The March 2009 election of Mauricio Funes and the broad coalition of social and political forces that supported his candidacy inspired the Salvadoran people and heralded a new era in the history of the smallest country in Latin America. The election of Funes, a Frente Farabundo Martí para la Liberación Nacional (FMLN) party candidate, for … Read more