Claudia Amaro and Hector Yamil Yaujar lead the same quiet, law-abiding lives as most of their neighbors in Wichita, Kansas. Amaro is a teacher; Yaujar runs a home repair company. Their son, Yamil Jr., 17, excels in school and wants to become an engineer. The family’s one crime: Amaro and Yaujar are in the U.S. without legal documents.

Like many of the nation’s approximately 11.1 million undocumented immigrants, Amaro and Yaujar are used to living with the fear of deportation. What makes their cases unusual is that they have requested asylum in the United States – on the grounds that their lives would be at risk if they returned to their native Mexico. Their case, which has been pending since 2013, is a reminder of how Mexicans and other immigrants in the United States face a variety of experiences and challenges. Each person has their own story.

Their lives were abruptly transformed one day in 2005, when Yaujar was pulled over for a minor traffic violation while driving home from his work as a house painter. After police discovered that his ID was false, he was deported. Amaro, unwilling to split the family, decided to join her husband in the northern city of Torreón the following year.

Once in Mexico, however, Yamil Jr. was bullied and had problems at school. The difficulty of readjusting to a way of life that both Amaro and Yaujar had forgotten was compounded by the violence that roiled the country during Felipe Calderón’s presidential term. Gun battles and killings were common. Extortion was commonplace. One day, Yaujar was kidnapped by two people who identified themselves as state police agents, and he was only released after a ransom equivalent to $1,000 was paid.

Yaujar’s kidnapping was the final straw; the family decided to risk a return to the U.S. In 2013, they turned themselves in to the authorities and petitioned for asylum. Amaro was released a few weeks later, but Yaujar was held in an immigration detention center for almost two years. They’re now on parole while they await the outcome of their cases. While on parole, they can get a temporary work permit that they have to renew every year, but they won’t have access to federal services or a path to residency or citizenship until the judge rules on their case.

The next step in the asylum process for Yaujar is a hearing in August in a Kansas City courtroom. But if the petition is refused, he could face deportation almost immediately.

That would present his wife with yet another painful decision. “I shudder when I think about (Yamil) going to court,” said Amaro. Yaujar based his petition on the grounds that he faced serious dangers if he returned to Torreón. Deportation would send him back into a violent landscape from which he barely escaped with his life.

Fears among undocumented immigrants were already building during the Barack Obama administration, which was responsible for a record 400,000 deportations per year during his first term. But Donald Trump’s pledge to crack down even harder by expanding the definition of “criminal” for deportation purposes and expediting the deportation process has turned lives upside down.

“In Mexico I felt trapped in a bottle,” said Amaro, who has volunteered as an organizer with the undocumented community in Wichita. “Here I feel free. I know this is not a perfect country, but this is my place, this is home.”

Amaro’s story is not unusual. Brought here as minors as the result of a decision they didn’t make, many young immigrants became U.S. citizens in all but name. They attended the same schools, played the same sports, and enjoyed the same music as their peers. But when the time came to get a driver’s license or a job, or go to college, their lack of a legal ID became a barrier.

To help this special community of almost 2 million individuals, commonly referred to as “Dreamers,”  President Obama signed an executive action known as DACA (Deferred Action for Childhood Arrivals) in 2012. DACA provided a Social Security number and a temporary work permit based on certain criteria. So far, over 750,000 youth have benefited from the program, but its future is uncertain.

Yunuen Bonaparte is one of those to whom DACA provided a “passport” to a relatively normal life. She has lived in California since moving to the U.S. with her family at the age of 12. But if DACA ends, the 27-year-old — along with her younger brothers (24 and 16) — will be at risk of deportation.

The memories of her family’s exodus from Michoacán, Mexico, to the U.S. are still sharp 15 years later. Bonaparte remembers being packed like “sardines” into a truck by coyotes, people who extract high fees for smuggling others across the U.S. southern border. The first effort failed when they were caught by the border patrol and returned to Mexico. Her uncle then hired a woman coyote and Yunuen crossed the border hidden in a car and was left in a hotel in Anaheim, California.

The experience gave her the kind of determination to succeed that immigrants have shown throughout U.S. history. Even after suffering through her parents’ difficult divorce, which left her for a time in a foster home, Bonaparte managed to learn English and graduated from high school with high test scores that opened the door to acceptance at three universities. But her lack of documents prevented her from getting financial aid. She went to a community college instead, and paid for her tuition while working in a fast food restaurant.

DACA gave her the opportunity to get a better job, and in 2015 she graduated from California State University, Fullerton. But DACA provides only temporary relief. “For us there’s really no path to citizenship,” she told AQ.

Bonaparte’s achievements are the result of her parents’ decision to risk everything and make the journey to seek a better life on the other side of the border. And she remains grateful to them — and to the U.S. — for the opportunities she found.

“If we stayed (in Mexico), I would not have been able to go to college (or) even finish high school, I’m sure,” she said. “I realize that it was a privilege to come here.”

Yunuen now works as a freelance photographer. Her current project is a series of portraits of DACA recipients (one of whom is pictured above), accompanied by their answers regarding what they would lose if DACA is repealed.

But she herself wasn’t very public about her immigration status until this year. After President Trump signed his first executive order on immigration on January 25, which included plans to build a wall on the U.S.-Mexico border, Bonaparte wrote on her Facebook wall:

“Here’s my revolutionary act for the day: I’m #UndocumentedAndUnafraid and I’m #HereToStay.” 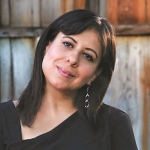 Eileen Truax is a Los Angeles-based journalist who covers immigration, politics and the U.S.-Mexico relationship. She’s the author of Dreamers, an Immigrant Generation’s Fight for Their American Dream. Her second book, about asylum in the U.S., is due to be released in January 2018.