When Edel Rodriguez boarded a shrimping boat called the Nature Boy as a nine-year-old in 1980, he joined 125,000 other Cubans in an exodus toward the United States. His family held the Statue of Liberty as a symbol of the freedom and acceptance they hoped to find.

As Rodriguez grew up, became an American, and developed as an artist, the icon’s power persisted. When he landed a job as a layout artist for Time magazine in 1994, he chose Lady Liberty as the backdrop for his company portrait.

Years later, when Donald Trump banned immigrants and refugees from seven predominantly Muslim countries from entering the U.S., Rodriguez, now 46, turned to the statue for reference. He captured the whirlwind of emotion surrounding the president’s act in one blistering image: an orange Trump holds in one hand a bloodied knife; in the other, the decapitated head of Liberty.

Published in February 2017, the cartoon went viral. By then, Rodriguez was used to playing lightning rod to the nation’s anxieties. 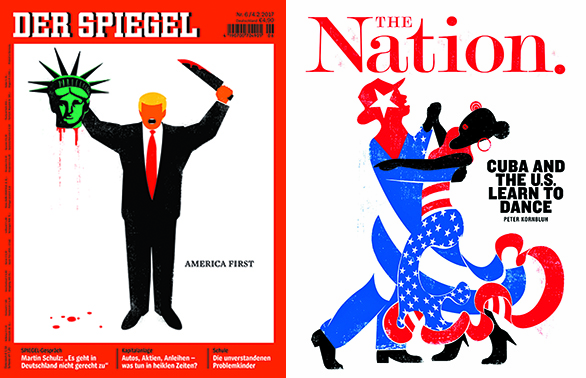 In 2016, when Trump’s campaign was in a tailspin, Rodriguez had drawn him as a featureless orange face with a screaming mouth melting into a puddle. Later, Rodriguez portrayed Trump as a fiery orange meteor hurtling toward Earth.

Though he’s become one of the president’s most recognized critics, Rodriguez doesn’t consider his work political, or himself an activist. Just as his focus is now on the U.S., it has been on Cuba in the past. One piece, in which Rodriguez added white Apple earbuds and a Nike swoosh to the classic portrait of Che Guevara, could only be viewed surreptitiously on the island.

“I make art that magnifies the truth,” Rodriguez told AQ. “I see something and I put a sharp focus on it.”

In fact, what inspired his caustic Trump portraits were the parallels he saw to Cuba. Now, the U.S. was also home to rallies in which protesters were attacked, to a leader who talked over people, to citizens afraid to speak out.

Barbassa is the managing editor of AQ.

Juliana Barbassa was the former managing editor for Americas Quarterly. An award-winning independent journalist, Barbassa is the author of Dancing with the Devil in the City of God: Rio de Janeiro on the Brink, based on her years as Rio de Janeiro correspondent for the Associated Press.