This article is adapted from AQ’s special report on Latin America’s armed forces.

A silent trend, capable of radically shaping policy and business over the long run, is taking hold in Latin America: Several countries are adopting ambitious measures to further decentralize their governments.

Under the slogan “More Brazil, less Brasília,” the Brazilian Congress is debating a constitutional amendment for a new “federative pact” focusing on fiscal regionalization – including a massive transfer of funds to states and municipalities over 15 years. In October, Chileans will directly elect governors for the first time and decentralization will likely be a key issue in the negotiations over a new constitution.

Meanwhile, the newly elected Argentine president, Alberto Fernández, is promising to transfer federal agencies to the interior of the country among other policies to implement a true “federal democracy.” Under its new Ley de Regiones, Colombia will start seeing two or more departments form sub-national administrative entities, which will plan and execute policies to promote development at the regional level. And the list goes on.

Demands for increased government efficiency are driving this regionwide transfer of power and resources to local, rather than national, policymakers. National capitals are still too powerful, while local authorities are the ones responsible for delivering most public services, from healthcare and education to security and transport. Also, amid worrisome levels of dissatisfaction with democracy, the responsiveness of policymakers closer to citizens is more important than ever.

But if the benefits of decentralization are evident, they should not overshadow one big risk involved: a surge in corruption. Latin America has been experimenting with decentralization since at least the 1990s, when democracy proliferated in the region, and countries undergoing this new wave of transformation would benefit from looking at what went wrong before. In some cases, the reallocation of powers and resources overwhelmed regional governments, nurtured local kleptocracies, reduced transparency and did not improve efficiency at all.

Peru, for instance, offers one critical lesson on how throwing money at local problems, without heavily investing in institution-building, can make corruption spiral out of control. With the end of fujimorismo, the Peruvian state embarked on a decentralization process based on the transfer of tax revenue and several regulatory attributions from Lima to local governments. A critical change was the so-called canon fiscal provisions, particularly the mining canon, designed to increase the share of taxes on mining going to local authorities where the resources were mined. It was a well-intentioned policy to boost development in communities facing the socioeconomic and environmental cost of Peru’s mining industry. In 2001, the mining tax for local governments abruptly went from 20% to 50%.

With the booming commodity prices of the 2000s and early 2010s, some departments started receiving a monumental windfall. In the case of Áncash, a poor region where a large part of Peru’s copper and zinc production is located, the mining canon began representing almost 70% of its total tax revenue. And the consequence was not exactly a spike in education or healthcare investments, but obscene levels of corruption.

All Áncash elected governors from 2006 to 2017 were incarcerated for corruption and, at one point, 17 of its 20 mayors were under investigation. Áncash is both the department that most benefited from the mining canon and the one with the highest number of officials facing corruption accusations. From January to August 2019, 431 Áncash officials were investigated – 100 more cases than in Lima, despite having almost a tenth of the population. “The region with the highest corruption cases (in Peru) is Áncash, precisely because mining offers benefits that are misappropriated,” said Omar Tello, one of Peru’s chief anti-corruption prosecutors. 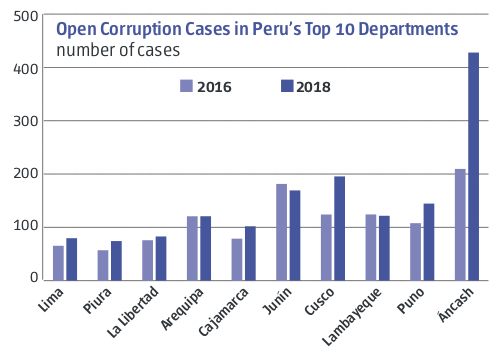 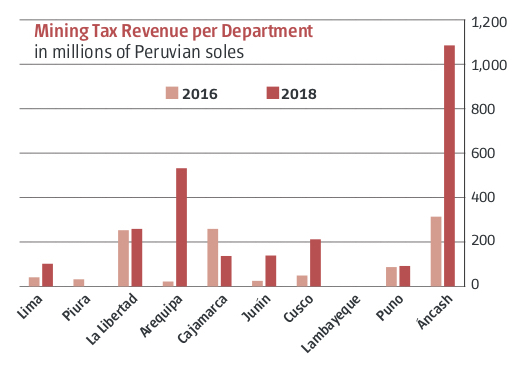 A similar tragedy shaped government decentralization in Mexico, partially caused by a profound lack of oversight of state-level authorities. The rise of competitive elections in the late 1990s and the arrival of the PAN’s Vicente Fox to the presidency in 2000 ended the PRI’s historical hegemony. The new power equilibrium led to the easing of the highly centralized relationship between the states and Mexico City. At the time, 25 of Mexico’s 32 governors were from the PRI and they would not take orders from a panista. On the other side, Fox believed that decentralization was crucial to modernizing Mexico.

In practice, decentralization in Mexico led to a combustible mix. Less dependent on Mexico City, governors began exerting almost unchecked power over their states – the press nicknamed them the “virreyes” (the viceroys). Meanwhile, transfers of federal tax funds to states increased more than 20-fold from the mid-1990s to the mid-2010s. The opaqueness, combined with an increase in revenue, led to a surge in corruption. According to the Mexican Competitiveness Institute, more than 41 governors faced corruption accusations from 2000 to 2013. But the crisis really exploded during the Enrique Peña Nieto years (2012-2018), when Mexico went through a string of scandals involving 11 governors – including the infamous case of Javier Duarte, from Veracruz, arrested in Guatemala after embezzling several million dollars while cartel violence was ravaging his state.

Of course, the cases of Peru and Mexico should not serve as an argument against Latin America’s new push for decentralization. Instead, they can offer Brazil, Chile, Argentina, Colombia and others policy ideas on how to mitigate the risks involved. One key lesson is that fiscal decentralization, without an ambitious program to build institutional and human capacity at the local level, tends to end badly. Another is that these administrative changes demand new accountability mechanisms – or countries will end up with opaque regional administrations dominated by impunity.

Latin America is now in a better position to face this challenge. In most countries, democracy and the rule of law are stronger than they were in the 1990s and early 2000s. And governments have access to new technological tools – from big data to long-distance learning – to promote transparency, train civil servants and strengthen institutions outside national capitals. The fundamental question, however, is political: Can leaders, at all government levels, understand and act to reduce the risks?

Simon heads the AS/COA Anti-Corruption Working Group (AWG) and is politics editor at AQ. Sweigart is an AQ editor and researcher for the AWG.


Tags: decentralization
Like what you've read? Subscribe to AQ for more.
Any opinions expressed in this piece do not necessarily reflect those of Americas Quarterly or its publishers.