Increased sophistication, scope, and fatalities define modern terrorism and leave few corners of the globe immune from its threat. Terrorism (destructive attacks against non-military targets typically for political purposes) has had a greater presence in some countries in the Americas, such as Colombia and Peru, but terrorist acts have been recorded elsewhere in recent years including Mexico, Chile, Venezuela, Bolivia, and Ecuador. Even in countries that have not experienced significant terrorist attacks, many citizens express concerns about terrorism so that, on average, worry about terrorism in the Americas is relatively high. 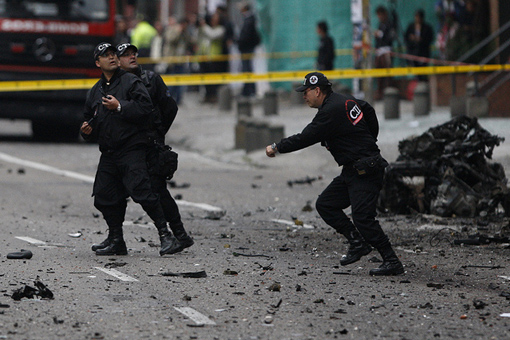 (Image of bomb explosion in Buenaventura, Colombia by: Globovision Junio 2010)

Fear of terrorism is important because it affects the ways people think about others and about government. Merolla and Zechmeister (2009) show that the threat of terror can increase distrust and authoritarianism, change how people evaluate political leaders and affect preferences over the balance of power, civil liberties and foreign policy. This shows there is important reason to be concerned about the extent to which people in the Americas are fearful of terrorist attacks.

This Insights report provides a portrait of worry about terrorism in the Americas and assesses some factors that predict it. Respondents to the 2010 AmericasBarometer survey by LAPOP were asked the following question: how worried are you that there will be a violent attack by terrorists in [country] in the next 12 months?

Figure 1 shows mean responses (with confidence intervals) by country to this question, with responses recalibrated on a 0-100 scale, where 0 means “not at all worried” and 100 “very worried”. Mean levels of worry about terrorist attacks are above the 50-unit mid-point on the scale in ten of the 24 countries.

Not surprisingly, Colombia and Peru, two countries that have suffered from numerous terrorist attacks, are found in the top tier of the list of countries, with mean levels of worry of 67.3 and 63.0, respectively. The RAND Database of Worldwide Terrorism Incidents reports 46 attempted and/or successful terrorist attacks in Colombia in 2009, most of which are attributed to the Fuerzas Armadas Revolucionarias de Colombia (FARC). Fewer incidents were reported in Peru, but the country has nonetheless continued to see occasional attacks, typically attributed to the Shining Path, which serve as reminders of much greater levels of terrorism in the 1990s.

Interestingly, Ecuador and Paraguay are at the top of the list, suggesting high levels of concern about security in those countries. For Ecuador, this may be due to concerns about FARC activity within its borders. Levels of worry are strikingly low in Jamaica, Argentina, and especially Uruguay. While some might expect the United States to place higher, its placement in the middle of the scale can be attributed to the economic decline that rivaled for the public’s attention in 2010. The public’s concern about terrorism also likely had been dulled by nearly nine years of repeated terror alerts typically followed by little to no sign of terrorist activity.

What determines variation in levels of worry about terrorism in the Americas? For one, it appears that country context matters and it is possible that individual characteristics do as well.

Effect of the Rule of Law

Among the country level factors that may influence worry about terrorism, it is likely that the stronger the rule of law, the more protected citizens should feel from violence by terrorists or others. A weak rule of law could create a climate that foments extremist views and/or might act as a proxy for state failures in the realm of the provision of security.

In addition to country context, characteristics of individuals and the neighborhoods where they live can explain variation in levels of worry about terrorist attacks. It can be expected that worry about crime (perception of neighborhood insecurity) would correlate with worry about terrorist attacks. Also it is likely that those who have been previously victimized by crime, or have a household member who was victimized, will be more concerned about the possibility of a violent attack by terrorists. In terms of political ideology, it can be expected that those on the Right will be more worried about violent acts, in part because Latin American guerrillas are usually considered to the Left. Those with relatives abroad may have heightened perceptions of the risk posed by terrorism, given the prevalence of discussions about terrorism as well as terrorist incidents in both the United States and Europe, where most members of the Latin American and Caribbean diasporas reside.

Taking these multiple factors into account—and controlling for basic socioeconomic and demographic factors—results of our multilevel analysis show that those who live in smaller towns and/or more rural areas, those who are poorer, less educated and who perceive of their own economic situation in a relatively worse light are more concerned about terrorism.

Likely this reflects an important reality of terrorism: the typical terrorist attack in the Americas inflicts more harm on groups of individuals who are marginalized in these ways. We see also that women are far more concerned than men, and those with relatives abroad are more worried about terrorism—a reality that may reflect transmission of information from places abroad where the threat of terrorism on a daily basis is more palpable than it is in most countries in Latin America and the Caribbean. As expected, variables measuring crime victimization, insecurity and having an ideology to the Right are positively related to worry about terrorism.

Turning to the country-level indicator, a country’s level of rule of law is indeed associated with worry about terrorism. Citizens in countries with lower rankings on the Freedom House Rule of Law scale are more worried about terrorism than citizens in countries where the rule of law is more secured. In short, the ability of a state to maintain well-functioning courts and security forces that ensure rights and oversee a relatively peaceful citizenry is key to promoting perceptions of protection from the threat of terrorism.

Worry about the threat of violent attacks by extremist individuals and groups is relatively high in many countries in the Americas, which is consistent with a reality in which both international and domestic terrorism is becoming more lethal, sophisticated and brazen. This is also a reality in which security concerns in general are quite high. When asked about the most serious problem facing the country, the 2010 AmericasBarometer survey shows that 29.6 percent of respondents in 25 countries in the Americas indicate an issue related to security.

Of course, not all individuals are worried about terrorism, and the overarching question was designed to take into account the fact that an important number of respondents would not have thought about terrorism.

There is important reason to be concerned about the extent to which individuals are worried about terrorism. A chief objective of terrorism is the spread of anxiety and various negative emotions, and research shows clearly that terror threat significantly affects political attitudes, evaluations and behaviors in ways that may stress democratic values, processes and even institutions (Merolla & Zechmeister, 2009).

Statistically, countries in which the rule of law is strong are those in which citizens are less worried about terrorism. It could be that such environments are less likely to breed extremists, either because efficient, well-executed, professional security policies act to prevent the growth of terrorist activity, or because such features and a general respect for individuals’ legal rights stymie attempts by extremists to convert others to their cause. Alternatively, our rule of law variable may simply proxy for the general state of security in the country, leaving individuals feeling more secure with respect to terrorism, but likely also other types of crime, in contexts where the rule of law is judged to be comparatively high.

Regardless of which interpretation, or whether a mixture of these interpretations, is most accurate, the results at least suggest the utility of a strong rule of law for promoting feelings of security.

1. The Insights Series is co-edited by Professors Mitchell A. Seligson and Elizabeth Zechmeister with administrative, technical, and intellectual support from the LAPOP group at Vanderbilt. The opinions expressed in this study are those of the authors and do not necessarily reflect those of the sponsoring organizations.
2. This is adapted from an article published by the same authors in the Insight Series.  The full article is available at the Insight Series website.
3. Funding for the AmericasBarometer has mainly come from the United States Agency for International Development (USAID). Important sources of additional support were also the Inter-American Development Bank (IADB), the United Nations Development Program (UNDP), and Vanderbilt University.