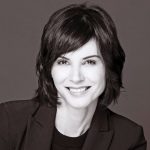 Fernanda Solórzano is the chief film critic for Letras Libres magazine, where she has written since 2001. Her articles have appeared in several Mexican and foreign publications, including the Cahiers du Cinéma supplement “Atlas du cinéma,” Cuadernos Caimán and Sight & Sound. She’s currently working on a Mexican film production dictionary and is a member of the Morelia Film Festival’s official selection committee.