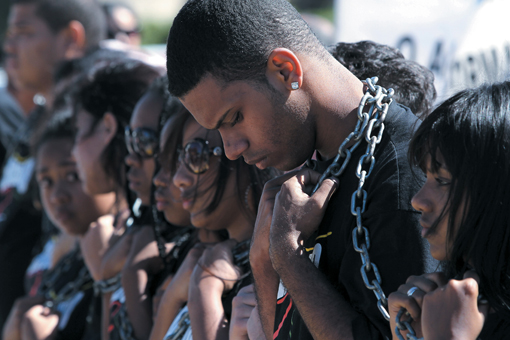 While affirmative action policies have been in place for decades in Canada and the U.S., it wasn’t until August last year that the Brazilian Senate passed a law requiring the nation’s public universities to establish admissions quotas based on family income and ethnic background.

The Brazilian law and recent efforts in other countries point to a growing public recognition of inequality based on race and gender. But does public opinion in the hemisphere support affirmative action? According to a 2012 AmericasBarometer survey conducted by Vanderbilt University’s Latin American Public Opinion Project (LAPOP) in 23 Western Hemisphere countries, support for affirmative action is mixed.1

The survey revealed that a majority of respondents supported policies that would remove barriers to inequality, such as race-based affirmative action. LAPOP asked respondents to state how much they agreed or disagreed with the statement that “universities ought to set aside openings for students with darker skin, even if that means excluding other students.” High percentages of those who “strongly agreed” or “agreed” were found in Paraguay (69.8 percent), Honduras (62.7 percent) and Argentina (62.6 percent), with Canada and U.S. respondents expressing the lowest levels of support, at 28.8 percent and 25.7 percent, respectively. Brazil, at 47.3 percent, also fell in the lower end of the spectrum. In over half the countries surveyed—13 out of 23—a majority of respondents expressed support for affirmative action policies.

Alana Tummino is editor of Americas Quarterly and policy manager at Americas Society and Council of the Americas.